US Grand Prix 2012: Anything can happen in Brazil, declares Alonso

US Grand Prix 2012: Fernando Alonso warns Sebastian Vettel that "anything can happen" in the final race of the season in Brazil 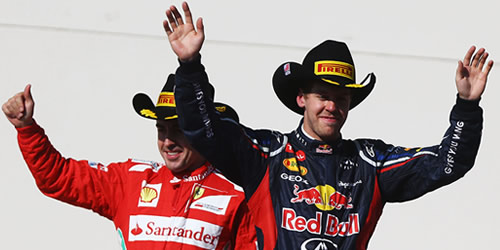 Fernando Alonso has warned Sebastian Vettel that “anything can happen” in the final race of the season in Brazil next weekend after the Red Bull driver was kept waiting for his third straight world title.

Vettel was beaten into second place by McLaren’s Lewis Hamilton at the Circuit of the Americas, with Ferrari’s Alonso finishing third to keep his title hopes alive heading into the Brazilian Grand Prix at Interlagos.

Alonso now trails Vettel by 13 points, with the German able to wrap up the title with anything above a fifth-place next weekend.

But with rain forecast for Sunday’s race the Ferrari driver is still confident over his chances of pipping the German to the title.

“It was an unexpected podium which came at the end of a particularly difficult weekend,” said Alonso after Sunday’s race. “We did not have the pace to match Red Bull and McLaren, so to only lose three points to Vettel is in fact a nice present.

“It could have been much worse, but now we will arrive in Sao Paolo in Brazil in with a chance right to the last. Maybe on paper that chance is not so big, maybe 25 per cent, but deep down, I feel it’s much more than that.

“Anything can happen at Interlagos and we saw again how important reliability can be, didn’t we? Then, there’s the chance of rain and a race in the wet can be very risky and we definitely have nothing to lose.

“Clearly, if it’s dry and we have a normal race, one can expect Red Bull to be in front of everyone and us on the third or fourth row, so the more unknown factors there are, the better it is for us.”