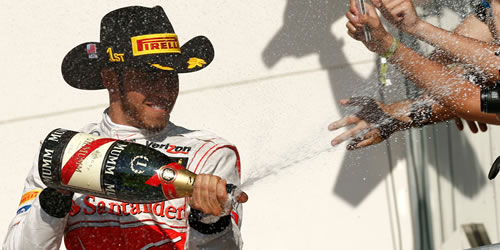 McLaren’s Lewis Hamilton seized a hard-fought victory at the US Grand Prix to stall Sebastian Vettel’s bid for the world title.

The British driver, who was the last winner at the US Grand Prix five years ago, showed unstoppable speed and determination to drive to the front of the grid.

Although Vettel failed to collect his third consecutive drivers’ championship title at the Circuit of the Americas, he did do enough to secure a triple constructors’ world championship crown for Red Bull.

It was a race of vital importance for Fernando Alonso if he was to keep his championship dream alive and the Spaniard drove sublimely, collecting third position on the podium.

Alonso’s third place means he is 13 points behind Vettel in the standings. The title will now be settled in the final race of the season in Brazil next weekend, with 25 points available for victory.

Though it is thought by some that Hamilton, Alonso and Vettel are the best drivers in the sport at the moment, it was the first time the three have topped the podium together.

“To be able to beat Red Bull and Sebastian is definitely a tough challenge but we managed to do it,” said a delighted Hamilton.

“We weren’t so bad in the first stint but weren’t able to get past and in trying to do so my tyres went off. He came out ahead and the traffic worked out quit well. Traffic usually catches me out so I was glad it worked slightly in my favour.”

It was a day of two races on the Circuit of Americas as twenty-four cars aimed for the podium and Vettel and Alonso battled for the title.

All eyes were drawn to the battle at the front between Red Bull’s Vettel and McLaren’s Hamilton.

With Hamilton being the only man to make an impression on Vettel’s dominant practice pace, it was always going to fall to the British driver to break up the Red Bull party.

Despite falling back into third after starting on the dirty side of the grid, Hamilton made a move on Red Bull’s Mark Webber to snatch second.

The British driver then closed the gap on the German leader to under a second, but could not pass his Red Bull rival.

It was not until after their only pit stop that Hamilton deployed DRS to blast down the outside of Vettel and onto the top of the podium.

Ferrari were playing team tactics from the start, breaking the seal on Felipe Massa’s gearbox to invoke a five-place grid penalty.

Under regulations, Alonso was moved onto the clean side of the track into seventh position, at the cost of his team-mate, who had qualified just in front of the Spaniard.

The decision paid off for Ferrari as Alonso blasted off the grid from the start, leap-frogging from seventh to fourth and ultimately securing a podium position.

There was only one tense moment for the team as Ferrari had a slow 6.3 second pit stop, which could have left the Spaniard with work to do.

But they were very lucky as a slow pit stop by Kimi Raikkonen, who had only been six seconds behind him, kept Alonso in third position.

Despite starting further down the grid than expected, team-mate Massa finished just behind his Ferrari team-mate, having held off McLaren’s Jenson Button in fifth.

Lotus’ driver Romain Grosjean had a difficult day after incurring a five-place grid penalty for a gearbox change.

The Frenchman spun his Lotus on turn 19, meaning he dropped from sixth to 10th and eventually finished the race behind his team-mate in seventh.

Webber had his race ended early as a suspected alternator failure saw him pull up on the side of the track.

On lap 17, the Australian, who had lost his Kers system, sparked worries for the team as he was using the same new alternator as Vettel.

Jean-Eric Vergne, who had ended practice early with a suspension problem, broke down on lap 16 after running off the track trying to get past the Mercedes of Michael Schumacher.