US Grand Prix 2012: Red Bull’s Sebastian Vettel made it a hat-trick as he topped the timesheets on Saturday in Austin 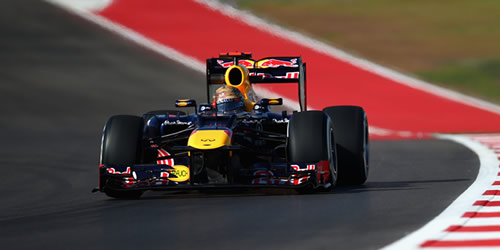 Red Bull’s Sebastian Vettel laid down a forbidding gauntlet to title rival Fernando Alonso and the rest of the field as he finished fastest in all three practice sessions ahead of the US Grand Prix.

The German driver, who was 1.4 seconds quicker in first practice and 0.7 seconds ahead in second practice, finished 0.254 seconds faster than McLaren’s Lewis Hamilton.

Pastor Maldonado pushed his Williams to the limit to finish in third position ahead of championship hopeful Alonso at the brand new Circuit of the Americas.

Although Ferrari has not been able to match Red Bull’s dominant practice pace, the team are working hard to prepare for the race.

The Italian outfit were spotted scrubbing their tyres ahead of qualifying by doing one lap on them and then pitting again. The technique takes the shine off the tyres, meaning they may drive a bit faster later this weekend.

Sauber’s Sergio Perez, who will be replacing Hamilton at McLaren next year, had a collision with Charles Pic.

The Mexican was flying after going purple in the first sector and tried to dive down the inside of the Marussia driver. Unfortunately, there was not space and Perez clipped the back of the car, spinning Pic round and breaking his own front wing.

Jean-Eric Vergne ended his session early after breaking the front suspension of his Toro Rosso. With the wheels facing inwards and not responding, the mechanics will be working hard to try to fix the car before qualifying.

Romain Grosjean also had his practice terminated after problems with his Lotus. If the team is forced to change the gear box, that will mean a five-place grid penalty for the Frenchman.

Turn 19 will prove decisive in qualifying. It proved challenging for the drivers on Friday and today continued in a similar vein, with Timo Glock, Vettel and Alonso all running wide on the corner.

With HRT’s future in jeopardy after their owners, the investment group Thesan Capital, said they were up for sale, it’s been a difficult weekend for the team.

Drivers Pedro de la Rosa and Narain Karthikeyan ended at the bottom of the grid after both struggling to get heat into their tyres. The drivers have to get within 107 per cent of the fastest time in first qualifying to be allowed into Sunday’s race.