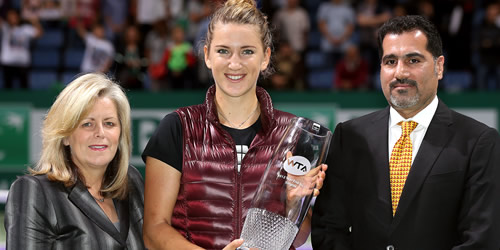 Victoria Azarenka reflected on an “incredible” 2012 after securing the year-end world No1 ranking.

The Belarusian is the 11th different player to finish the year at the top of the rankings since the introduction of the new system in 1975.

”To finish No1 shows I’ve been playing really well throughout the whole year. To be a part of this history is just an incredible thing.

“When I first started to play tennis as a little girl, becoming No1 in the world seemed so far away, and now I’m standing here and holding that trophy.”

Azarenka rose to No1 after capturing her career-first Grand Slam singles title at the 2012 Australian Open. Aside from a four-week period after Roland Garros, where Maria Sharapova held the top ranking, Azarenka has been at the top for 44 of the 52 weeks in 2012.

The 23-year-old then achieved a 14-match winning streak after the US Open, en route to titles at the China Open (Beijing) and Generali Ladies Linz.

She is the first player to win two Premier Mandatory events in the same season since the Roadmap calendar reforms in 2009, and her career title tally now stands at 14, the fourth most among all active players.

“Victoria has had a spectacular 2012 season and she joins an elite group by finishing the year as the world No1,” said Stacey Allaster, chairman and CEO of the WTA.

“In a season that has included climbing to the pinnacle of the rankings, winning six singles titles including her first Grand Slam, and two Olympic medals, Victoria has been a true champion on and off the court.”