ATP season review 2012: Marianne Bevis takes a look back at the final chapter of an enthralling tennis season 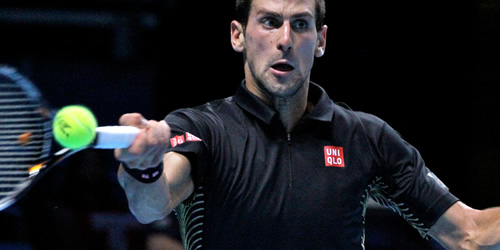 Novak Djokovic started and ended the year as world No1 Photo: Marianne Bevis

Andy Murray had enjoyed an unbeaten season in the Far East swing of 2011 but this time he came away without a title.

Novak Djokovic denied him in Shanghai, despite Murray leading by a set and a break, and Murray lost to Djokovic from a set up in London, too. He finally went out of the World Tour Finals semis to Roger Federer.

By now, the Swiss was where Djokovic had been at the start of 2012, defending one title after another, and that would determine the year-end No1 even before they played for the ATP World Tour Finals title. Once Federer lost the final of Basel, he opted out of Paris, while Djokovic took the Tokyo and Shanghai titles.

This time, the Serb arrived in London looking the freshest of the pack. Sure enough, it was a triumphant end to his year: a clean sweep through the year-end tournament. He closed 2012 with the same number of titles as Federer, six, but back on top of the rankings.

So despite entering 2012 having to defend 10 titles, despite a resurgent Federer wrenching Wimbledon and the top ranking from him, despite his friend/foe Murray stealing the US Open and the autumn limelight, the Serb finished the year on top, having been part of the top-three-rated Grand Slam matches and part of three of the top-five-rated ATP matches.

He also topped the earnings table—just under the $13m mark—and goes into 2013 more than 2,600 points clear of the pack.

This time around, few will question whether he can do it all again.

Recent years have tested the spirit of two men who have fought to break through the glass ceiling of the top four.

The 30-year-old David Ferrer has been one of the most respected players on the tour since he the year he broke into the elite group for the first time to reach the final of the Masters Cup in 2007. 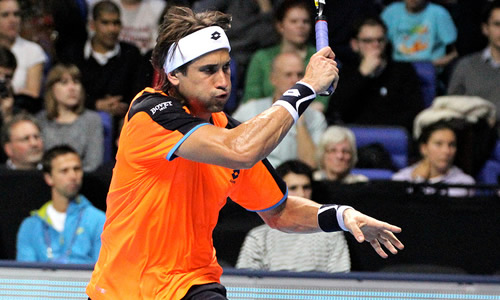 Spaniard David Ferrer ended the year as world No5

Still he was not done, improving his game at the front of the court, developing a bigger serve and becoming possibly the fittest man on a tennis court. It all heralded the best season of his 12-year career: He led the tour with seven titles and 76 match-wins, and won his first ever Masters title in Paris.

In Grand Slams, he also put together his best year, with quarter finishes in Australia and Wimbledon and semi finishes in France and the US. Finally, in his fourth Davis Cup final, and with Nadal sidelined, he played the lead role in getting Spain to the final, though his two outstanding straight-sets wins on a fast, indoor court were not enough for Spain to beat the Czech Republic.

And while he was unable to beat Djokovic, Federer or Nadal in 2012, he did beat Murray at Roland Garros and came close to doing the same in the quarters of Wimbledon, losing 7-6, 6-7, 4-6, 6-7. Now he sits, ranked No5, only 290 points behind Nadal—the closest he has ever been to becoming the top-ranked Spaniard in the world.

One man Ferrer did beat consistently in 2012, however, was Juan Martin del Potro, on hard courts and on grass. Yet this was a year when the Argentine—the only man until this summer to break the current Grand Slam triumvirate—showed that his return to form after wrist surgery was almost complete.

He began 2012 ranked No11, won four titles and qualified for the WTFs for the first time since he reached the final in 2009. And it was a case of ‘so near, yet so far’ along the way.

Since beating Federer at the US Open and WTFs in 2009, he had met the Swiss only once. In 2012, in what became one of the rivalries of the year, the two met eight times, and although Federer had the upper hand, the matches became closer with every encounter. Dubai went to two tie-breaks and at Roland Garros, Federer went two sets down before coming back to win.

Then came that epic contest at the Olympics, Federer levelling with a second set tie-breaker and going on to take the match 19-17. Finally, del Potro took that extra step in another nail-biter, a 6-4, 6-7, 7-6 win on Federer’s home ground of Basel, and he finished the year in similar style, with a win at the World Tour Finals.

There will be more questions for the Argentine in 2013: He has not, for example, played Murray since 2009 and did not meet Nadal in 2012. However, del Potro was one of the scant men to beat Djokovic in 2012, earning Olympic bronze.

In short, perhaps he will again be the man, as he was once before, to break the grip of the “big four” on the rankings and the Grand Slams.

Part one: It began and ended with Novak Djokovic
Part two: Federer’s Wimbledon, Murray’s US Open