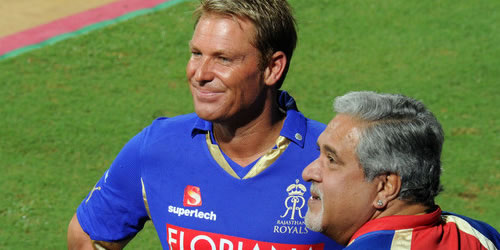 Shane Warne has not played Test cricket for over 2,162 days Photo: Royalchallengers.com, via Flickr

Would a 43-year-old Shane Warne make Australia a better team?

Initial reports had stated “he would be” prepared to announce a sensational Test comeback if old friend and Australian captain Michael Clarke gave him a call, though the veteran leg-spinner clarified his position in a subsequent news conference by saying “he could do it”, stopping short of confirming his a shock return.

Even so, the controversial Aussie believes he can bowl his side to Ashes victory in, not one, but two series against England in 2013.

It was in 2007 that Warne walked off the Sydney Cricket Ground as an Australian player for the final time, after playing a huge part in reclaiming the Ashes with resounding 5-0 scoreline.

The once-in-a-generation bowler had finished with 708 wickets, having breathed new life into the dying art of leg-spin.

The chubby, and initially shy, bloke from Victoria had single-handedly made the most complicated discipline in cricket fashionable again.

Each of these have had different levels of success and none have returned to the level of their former glories.

Mayweather, 35, has the greatest chance – if a fight against Manny Pacquiao is ever agreed – considering he is only one of two on that list that still remains in their sport after their second coming.

Warne is arguably greater than all of these sporting stars but if he were to return to cricket he would to have to prove himself all over again.

It is a feat that is, let’s admit it, probably beyond him after 2,162 days away from the rigours of international cricket. Unless he is a genius – as many, even today, think he is.

He is also a trimmer Warne than of yesteryear – thanks, apparently, to the influence of his girlfriend Elizabeth Hurley – but would he really be able to take on England opposition largely two decades his junior – and also, most would say, better players than those he faces in his heyday?

Warne is currently gearing up for the latest edition of the Big Bash League – the Down Under version of Twenty20 cricket.

Although it is impossible to predict how he will fare from his performances last year in the competition – when there was the odd wicket captured by the former hero – it is clear he is not the match-winner he once was.

Instead he is a welcome figurehead of a commercial game that has enticed other stars to remain in cricket – Muttiah Muralitharan and Brett Lee to name two. There is even talk of Olympic 100 metres champion and world record holder Usain Bolt featuring in the BBL when he leaves the track in 2016.

Warne has divided people’s opinions during his Test career and in the commentary box. It is one of the reasons why he was often decried as little more than a pantomime villain by the media, despite his undoubted talents.

But if Warne does return there is the danger that he will flop – damaging his own image, his team and cricket – a game he once did so much to revive because of his crowd appeal as a flamboyant and efficient leg-spinner.