Bradley Wiggins is a worthy winner of the Sports Personality of the Year award after a glittering 2012, writes Matt Cansick 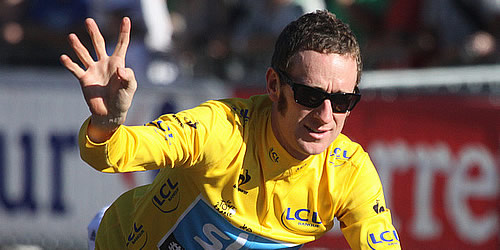 Bradley Wiggins won the Tour de France in July Photo: B A Ryan, via Wikimedia

On a night that celebrated the incredible depth of sporting accomplishment from the past twelve months, Bradley Wiggins, Olympic road race champion and the first British winner of the Tour de France, was deservedly crowned Sports Personality of the Year for 2012 on Sunday.

With nearly half a million votes he was the clear winner, and the chants of ‘Wiggo’ that preceded the announcement showed the people got who they wanted. The last time this was heard he had been conducting his fans at Hampton Court Palace, the scene of his crowning glory.

But it shouldn’t be forgotten that aside from the Tour and Olympic gold, he also won Paris-Nice, the Tour de Romandie and the Criterium de Dauphine in the same year, an unprecedented accomplishment.

Runner-up Jessica Ennis took just under 23 per cent of the votes, the poster girl of the 2012 games pushed into second place despite carrying the weight of a nation until that unforgettable Saturday night in the Olympic stadium.

In a year in which he reached the Wimbledon singles final, won the US Open, and took gold and silver at the Olympics, Andy Murray finished third. In any other year he would have won at a canter.

It’s also a little ironic that this was the year the very thing that divided British tennis fans – Murray’s perceived lack of personality – was comprehensively dismissed with his heartfelt thanks to the crowd on Centre Court following his loss to Roger Federer at SW19. How apt this title would have been after that emotional day in July.

Wiggins, of course, is anything but boring. He has a remarkable ability, much like Sir Steve Redgrave, of perfectly treading the line between arrogance and modesty. He is not dismissive of his achievements, nor is he unnecessarily self-deprecating.

He is always quick to praise his team and those who have helped him, but this is no press-officer-approved sound bite. Forget footballers shrugging off a goal with “it’s all about the win”: in cycling you rarely do anything on your own.

Cycling is a team sport, but watch Wiggins in action and he backs his words up with actions. He was part of the team that tried to get Mark Cavendish gold in the road race in London, and only weeks before it was he who led his team-mate out on the Champs-Élysees in the final stage of the Tour.

Wiggins’ initial success was in the velodrome, and he was a major part of Britain’s emergence as the dominant nation in track cycling. This became the sport, like rowing before it, that the British public looked to for medals at the culmination of each Olympic cycle.

Along with Sir Chris Hoy and Victoria Pendleton, he will have inspired hundreds if not thousands of children, and as Ed Clancy, Jason Kenny and Laura Trott have stepped forward as the next track stars, we are seeing the emergence of further talent on the road.

Geraint Thomas is leaving a glittering track career behind, there are high hopes for Luke Rowe, and Chris Froome has already proven that a grand tour victory is within his grasp.

The 2011 Sports Personality winner Cavendish may have raised the profile of road cycling in this country, but not the way Team Sky has. Wiggins won the Tour riding for an English team – which included Cavendish, of course – and this will further encourage youngsters who look up to him.

Outside of Britain, Wiggins has a key role to play in the future of cycling in general. He bristles at the mention of doping, and it is a shame to bring it up here, but the key part of Dave Brailsford’s mission statement when launching Team Sky was that they wanted to win the Tour with a clean British rider.

Wiggins hates being asked about doping, and it is good that he does. He is leading the fight to ensure that, in future, it doesn’t have to be mentioned at all. We are not there yet, but we are certainly heading in the right direction.

He is held in high esteem in France in particular, partly because of his willingness to learn the language, but also because of his actions during stage 14 of the 2012 Tour. Having slowed to allow defending champion Cadel Evans to rejoin the peloton after he suffered a puncture, he earned the nickname ‘Le Gentleman’.

Whilst Sports Personality should not be taken as a literal title, Wiggins is exactly that. The sideburns, the mod sticker on his helmet, and his forthright but cheeky manner all endear him to the public. But underneath all this, there is an absolute dedication to what he does.

He has given us some of the most memorable moments of an extraordinary year, and has been rightly rewarded by those he has entertained.