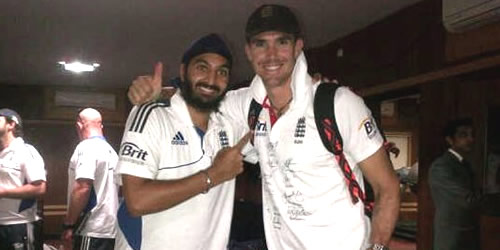 England’s transformation from rigid day-trippers to dynamic explorers of their own ability has been nothing short of phenomenal over the last four weeks.

After India’s nine-wicket win in the first Test in Ahmedabad, ex-England greats were predicting a 4-0 series whitewash.

Yet just 27 days later, Alastair Cook has instigated a result more miraculous than anyone connected with England both past and present imagined.

The tourists’ 17-man Test squad arrived in India at the end of October with a series of fixed ideas that were to be adhered to whatever the match situation, pitch or opposition.

These were the same beliefs that England used to beat India 4-0 last year at Oval and to reach the summit of the world Test rankings – three seamers were to be played allowing room for one spinner, absolutely no “horses-for-courses” selections and if the team lost it would be, more often than not, the same XI for the following game to offer a chance of redemption.

However, through the series the selection principles have gradually shifted from “altered slightly” to “polar opposite” – a move that enhanced England from competitive to eventual series winners.

After the selectors’ failure to pick a second spinner in Monty Panesar, they made amends for their mistake and corrected the side for the second Test in Mumbai.

Not only that but when the second Test’s second innings came around, England were being street-wise in India’s own backyard.

Panesar opened the attack with James Anderson. It was far cry from Ahmedabad where England’s sole front-line spinner Graeme Swann had to wait until 15th over before bowling his first spell.

Cook had learnt from his error and now understood the absolute necessity to use spin early while the ball was still hard on docile sub-continental pitches.

But the best way to illustrate England’s new-found flexibility is in the middle order.

With Ian Bell’s absence for the second Test, Jonny Bairstow was selected ahead of Eoin Morgan and Joe Root on form alone.

Bairstow had performed with a solid 95 against South Africa at Lord’s over the summer and he was to be the next man in line.

However, by the final Test, England had realised the importance of selecting the player primed specially for a certain situation – a “horses-for-courses” selection.

The uncapped Root was a left-field choice but the selectors had undoubtedly felt in the three days between Kolkata and Nagpur, the right-handed batsman could serve a purpose at number six.

The England set-up had included the 21-year-old over an established international cricketer in Morgan, Bairstow, who had performed so admirably just three months before against one of the finest bowling attacks around, and the incumbent Samit Patel.

It was selection that caught every England supporter off guard but it proved to be a masterstroke.

Kevin Pietersen described the wicket as “toughest” he played on his 92-Test career, but Root persevered, and then prospered to accumulate 73 hard-earned runs over 288 minutes – the longest innings by a England debutant since Andrew Strauss’ knock in 2004.

Each of the four Test pitches differed from the last, yet the tourists have found a solution each time since Ahmedabad.

And by Nagpur, it was India who looked stubborn and insecure rather than England.