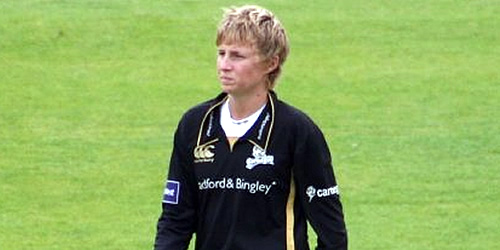 Joe Root clocked up 73 against India in the final Test in Nagpur Photo: Matt Root/Wikimedia

Whatever happens over the remainder of this Test match, or, indeed, in Joe Root’s near-future, the young Yorkshireman has already set three extremely encouraging precedents. Interestingly, each can be linked with one of his country’s opening batsmen – two from the past one from the present.

Firstly, Geoffrey Boycott is a huge fan. Given Root’s mother county, as well as the fact that his first five-day knock of 73 spanned 229 balls of intense application, that might not seem so surprising. But Boycott is not one for inane nepotism.

While those Barnsley tones were audible throughout Friday morning on the BBC’s Test Match Special, they were not as relentless as usual. Rather than uncompromising rants, Boycott spared quieter praise for England’s number six. One endorsement stood out.

“He can play, this lad,” said Uncle Geoffrey in a distant voice, sounding almost premonitory. “And I know how highly they rate him.”

That is the crux. Root’s progress through age-group cricket has been more steady than spectacular. Despite being boosted by an unbeaten 222 against Hampshire last season, his first-class average stands just a shade over 38. Still, Andy Flower has identified something beyond the statistics. Like Boycott before him, the 21 year-old possesses innate determination and tenacity – qualities that will thrive in the longest format. Put simply, he is built to last.

The second of Root’s resonating traits is entirely superficial. Tall but slight and willowy, England’s debutant has somewhat awkward posture. Awaiting the bowler, he thrusts his jaw and shoulder forward to counter-balance a hunched back.

This all got a bit too much for David Gower, who dissolved into a fit of giggles in the Sky Sports studios during a videophone call to India at the close of play on Friday. The subject of his mirth was Michael Atherton, the batsman-turned-pundit who himself managed nearly eight thousand Test runs from a strikingly similar stance.

Certainly, a commitment to keeping his eyes level means that Root’s defensive technique is very solid. If somehow Atherton’s trademark temperament and knack of grinding out tough periods transfer as well – and the early signs look good – there is no limit to potential progress.

Lastly, Root has so far made his first steps with coincidentally close connections to that of his captain, who just happens to be England’s most prolific century-scorer of all time. Five and a half years ago in the very same city of Nagpur, Alastair Cook was selected for his second Test match having made a stuttering debut at Mohali a week previously.

Alongside Andrew Strauss, the then 21 year-old ground his way past fifty in the first innings, an effort far more impressive for fortitude than fluency. Sound familiar? Well, Cook managed the first of his 23 hundreds a couple of days later; compiling 103 not out to save a draw for his side.

As far as omens go, with England only requiring a stalemate to take a series in India for the first time since 1985, that one is pretty attractive. It is probably too much to expect Root to embark on such an incredible run of form, but anything close will make him a permanent fixture.

Of course, like this illustrious trio, Root is destined to open the innings for his country. Just when that is depends largely on how Nick Compton navigates the home and away double-header with New Zealand, almost certainly a less testing assignment than the current one on crumbling wickets against Ravi Ashwin and co.

Until the Somerset man endures a prolonged period of paltry returns though, Root can remain in the lower-middle order. The presence of Kevin Pietersen and Matthew Prior either side of him mean the run rate will take care of itself and there is no pressure to score quickly whatsoever. Jonny Bairstow or James Taylor might bring more dynamism consistently, but Root is an evidently capable of understated accumulation while stroke-makers flourish either side.

This may seem hasty after a single success in the spotlight, but there have been some significant developments behind the scenes. Twin twenties against Mumbai A at the start of Novmeber showed he was worth his place on the plane, while a magnificent 166 carved from 211 balls for the England Performance Programme three weeks later comfortably eclipsed the naturally attacking talents of Eoin Morgan, Taylor and Craig Kieswetter. In short, Root is more than reliable.

For what it is worth, there is one first-hand account of his trustworthiness I can offer. About seven years ago, I was waiting to open the batting myself against Worksop School. Padded up, I realised that the rubber grip on my bat was badly ripped. Amateurish unease ensued, before a diminutive member of the opposition approached me with some calming words in a nasal Sheffield accent.

He took my Kookaburra into his changing room and emerged with it two minutes later, brand-new grip in place. A couple of years younger than me, Joe Root held a mature, unflappable manner that was almost embarrassing in how much it accentuated my lack of composure.

Now, those characteristics have propelled him to the top. Sunday promises to be decisive in England’s hopes of clinching something extremely special in Nagpur, and Root could conceivably be required to hold firm during a vital passage of play. Even in front of baying crowds on a tricky pitch, do not expect him to panic. He is designed to face such challenges.