India v England: Matt Cansick takes a look back at the talking points from the final day of the fourth Test and the series 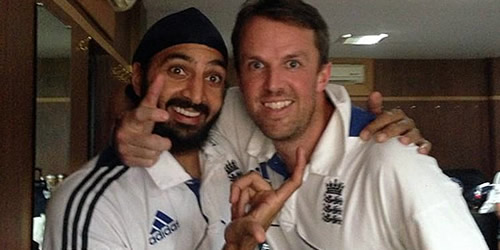 India finally succumbed to the inevitable on the final day of the series as the hosts were unable to bowl England out and attempt a run chase. Resuming with a lead of 165, Jonathan Trott and Ian Bell picked up where they left off on Sunday and completed their centuries, Trott eventually falling to Ashwin for 143 and Bell making 116 not out. Joe Root came in to make 20* and help England reach 352-4, and by this time there was nothing for India captain MS Dhoni to do but shake hands and admit defeat. James Anderson was named man of the match for his 4-81, and unsurprisingly the man of the series was Alastair Cook. He now finds himself as the first England skipper to win a series in India since David Gower in 1985, and he has emphatically demonstrated that the captaincy is no burden when it comes to his run-scoring obligations at the top of the order. He could not have wished for a better start to his tenure, both personally and from a team perspective.

Having face questions about his place throughout the series, particularly when coming straight back into the side after missing the second Test, Bell finally responded to his critics with a hard-fought century. It was far from his most fluent, coming from 306 balls, but it was certainly timely. His partnership with Trott saw England home, and he now has something to build on ahead of the tour of New Zealand early next year. This presents a good opportunity to get a couple of big scores against weaker opposition before the English summer. Root’s debut has deepened further the pool of batting talent, and the England coaching staff will be hoping that this will spur on those currently in favour to ensure they do not lose their spots. One of England’s strengths during their rise to No1 in the world was the number of Test-standard bowlers they could call upon, and if they can do the same with their batsmen they will be a hard team to beat.

This is a damaging defeat for India, and in a cricket-mad country, there will be a great many questions asked. Ahead of this series, the aim was simple: avenge the humiliating 4-0 defeat suffered at the hands of England last year. Since the victory in Ahmedabad, they have been outplayed in nearly every session and there may be some significant changes made to the side in the coming months. Sachin Tendulkar’s place has been brought into sharp focus, with many suggesting the time has come for him to step away from international cricket, and Dhoni may not get the chance to turn the team around. Other experienced players have failed to deliver, and an injection of youth may be what is required. There is, however, cause for optimism – not least in the shape of Cheteshwar Pujara, who came out of the series with a lot of credit. The upcoming home series against Australia may represent a last chance for many of the old guard.

Having lost the first Test, even a drawn series would have represented a solid start to Cook’s reign as England captain. So, to have responded in such fine style from a heavy defeat speaks volumes for the character within the squad, and having put the Kevin Pietersen controversy behind them, the side now appears to be rediscovering the unity that made for such a successful team under coach Andy Flower. The series home and away against New Zealand will be a chance to rack up a few more wins ahead of the Ashes next summer, but this victory will do far more for the team’s confidence. Looking further ahead, sub-continent tours will now appear less daunting in the wake of this performance. Tours to India, Pakistan and Sri Lanka have represented significant hurdles for the most recent Ashes-winning sides, but Cook and Flower may just have found the formula that will return England to the top of the world rankings.