Max Chilton signs a deal to drive for Marussia F1 Team next season, becoming the fourth British driver in the sport 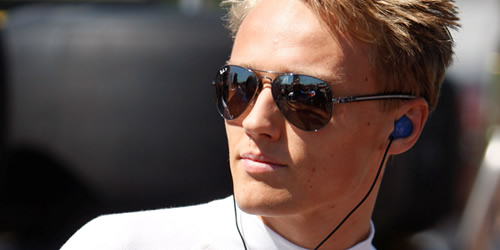 Max Chilton has become Britain’s fourth Formula 1 driver after signing to drive for Marussia next season.

The Surrey-born 21-year-old has gained promotion from his position as reserve driver and joins fellow Brits Lewis Hamilton and Jenson Button, who drive for Mercedes and McLaren, and Force India’s Paul di Resta on the grid.

“It’s hard to put into words how I’m feeling today,” said Chilton. “It comes at the end of what has been a fantastic year for me.”

Chilton will join Timo Glock at the team next season as 2012 race driver Charles Pic switches to Caterham.

“We are delighted to welcome Max to the role of race driver with the Marussia F1 Team for the 2013 season,” said Marussia team principal John Booth.

“We have spent a significant amount of time evaluating his performances during 2012, both in our own car in a testing situation and also from the pitwall as we monitored his progress alongside the other members of our junior talent pool during grand prix support races.

“We felt confident enough in his ability and potential to appoint him to the role of reserve driver in September and since that time his development has been rapid in all aspects.”

Chilton added: “I am very fortunate to have spent the last six races with Marussia as reserve driver, which means that instead of a standing start, I am already up to speed and at ease with the people, the culture, the systems and of course, the 2012 package.

“During the period since the Japanese Grand Prix, I have watched at very close quarters the incredible commitment and determination to succeed that saw everyone in the team pushing until the very last race. I feel very lucky to be able to embark on my F1 racing career with this group of people.

“Pre-season testing is just a few weeks away, so my focus now is to continue my physical preparation whilst spending as much time as possible working with the technical team to help develop the car I will drive in my debut F1 season.”