Nick Powell ‘can become the next Wayne Rooney at Man United’ 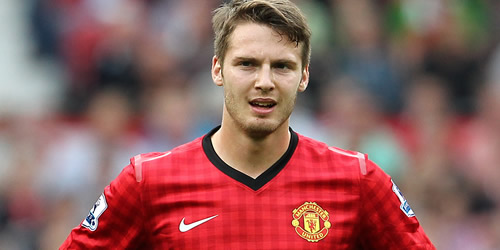 Nick Powell secured a £6m move to Manchester United in the summer Photo: Back Page Images

The 18-year-old secured a £6m move to Old Trafford in the summer but has been used sparingly by Sir Alex Ferguson despite scoring on his debut against Wigan in September.

Powell’s two seasons in Crewe Alexandra’s first team saw him rise to prominence, with Ferguson declaring his intention to make him a long-term replacement for veteran midfielder Paul Scholes.

But Jones, a former Crewe player himself, sees the England under-21 international’s future in a more advanced role for the Premier League leaders, as a successor to Rooney.

“I saw him at Crewe a couple of times and you could see for his age, what he has, he was big and strong and fast and obviously he could score goals,” Jones told The Sport Review.

“I think he’s definitely going to be a good buy for Manchester United. I wish Liverpool would have picked him up!

“Alex Ferguson seems to be putting him in now and then just to give him a little taster and bringing him up but when he is given the chance, he’s taking it and has scored. He doesn’t look out of place at all in the Premier League.

“If there’s one manager that can turn him into the next Wayne Rooney is probably Alex Ferguson. He’s pretty similar to Wayne Rooney. I know he’s a lot taller but he’s big, strong and fast, and has got a great shot on him.”

Jones, however, does admit that United’s current wealth of strikers may see any hopes Powell has of leading the line dashed by the likes of Rooney, Robin van Persie and Danny Welbeck.

“It’s going to be interesting what happens with him in the next 12-18 months,” he added.

“Manchester United have got a few decent centre-forwards and is he actually going to get a decent chance there? I’m not sure.”

Crewe’s reputation for player development is well known throughout the game with Jones, Manchester City coach David Platt and Celtic manager Neil Lennon constituting some of their more notable graduates to ply their trade in English football’s top flight.

And the former Reds full-back attributes this success to the methodology of former manager Dario Gradi, now operating as director of football at the Gresty Road club.

He said: “I think Dario always seems to be able to spot a good player. Even Neil Lennon, for example, [when] Manchester City released him, Dario picked him and thought ‘right, I can make him a player’. He played for Crewe for a couple of years and sold him on.

“He did that to a couple of players [like] David Platt, Robbie Savage. They got released from big clubs but came to Crewe and he turned them around.

“I think the younger players that were at the academy, say like me or Danny Murphy, Craig Hignett and Nick Powell, I think what Crewe do is they play football.”

Rob Jones was speaking to The Sport Review for the launch of his autobiography ‘Robbed: The Rob Jones Story’. Visit www.robjonesbook.co.uk for more details

Shinji Kagawa could feature for Man United against Man City