Matt Prior, Kevin Pietersen and Graeme Swann all tweet their thoughts after England secure an historic Test series win in India 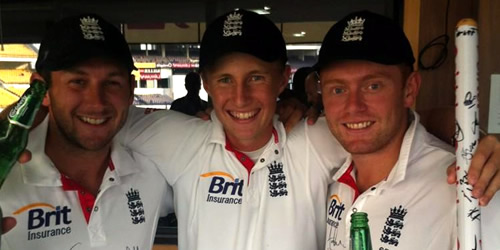 England ended a 28-year wait to win a Test series in India after Alastair Cook’s men drew the Nagpur Test to seal a 2-1 victory.

It marked a remarkable comeback after the tourists had suffered a heavy defeat in the first Test at Ahmedabad before winning in Mumbai and Kolkata in style.

Here is the best of the Twitter reaction from the professionals past and present.

Spinner Graeme Swann (‏@Swannyg66) plans on celebrating in style: “A series win of this magnitude can mean only one thing…power ballads#finalcountdown #livinonaprayer #hereigoagainonmyown … What a feeling, winning the series and get to see my kids again in the morning. Oh and the wife.”

Meanwhile, wicketkeeper Matt Prior (‏@MattPrior13) can’t resist a dig at a former captain: “Where’s that tweet predicting 4-0 win to India @MichaelVaughan? The boys can’t seem to find it? #turnsroundquickly”

Luke Wright ‏(@lukewright204) puts the win in context: “Congrats to all the England Test players and staff with a series win over India. Amazing achievement, they are so tough to beat over here.”

Australia legend Shane Warne ‏(@warne888) hopes to see India back to their best soon: “Well done to the England cricket team. A fantastic series win and one they should be very proud of. Celebrate properly…. I hope India will learn from this series and work out how they can improve – quickly… world cricket needs India strong in all forms!!!!”

Former wicketkeeper Alec Stewart (‏@StewieCricket) revels in the historic victory: “Congratulations to the England cricket team. A fantastic series win and one they should be very proud of. Celebrate it well lads! Winning the series after going 1-0 down is one of Englands great efforts in recent times. I didn’t see this turn around happening! #quality Haven’t heard from too many Indian cricket fans recently! What happened to the 4-0 whitewash you were all predicting? Thoughts? #2-1!”

Steven Finn (‏@finnysteve) predicts a heavy night: “Awesome effort from the lads in India. Its not the same from your living room. Enjoy tonight lads! #messy #lionel”