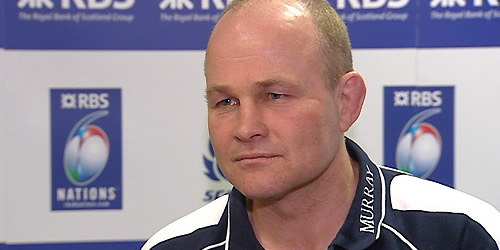 Sean Lamont believes Scotland can bounce back from the lows of this autumn by winning the Six Nations.

The 31-year-old was part of the Scotland side that lost all three autumn internationals to New Zealand, South Africa and Tonga.

Scotland have since slipped to 12th in the world rankings and head coach Andy Robinson chose to resign following the poor results.

But Lamont, who has played in 71 Tests, believes Scotland can take a leaf out of England’s book with Stuart Lancaster having turned things around for the Red Rose.

And with Scotland set to start out their 2013 Six Nations campaign against Lancaster’s men on 2 February, Lamont insists that if Scotland’s inconsistencies are resolved they can be a force to be reckoned with.

“I would like to win the Six Nations, but for Scotland to win it we need to be flawless and clinical in every game,” he said. “We can do it, as we’ve shown against the big teams.

“We can all on our day be those world beaters, it’s just about getting that collective spot on every game – the rollercoaster ride of performances needs to go.

“We’ve got England first up who will be in good form because they had a great win against New Zealand and they’ve got a good team together.

“A change of coach is always an uncertain time, but it doesn’t mean it can’t be done. Lancaster came in and has turned it round – it can be done.”

In last year’s RBS Six Nations, while Lancaster’s England were finishing runners-up to Grand Slam winners Wales, Scotland were bottom of the pile with no victories to their name.

And Lamont, who joined Glasgow Warriors over the summer from the Scarlets, admits he and his Scottish team-mates must move on quickly from their autumn setbacks.

“There is no point dwelling on it too much because it can eat you up and you can’t change what has happened,” he added.

“You throw yourself in physically and mentally, but it was a tough autumn because we didn’t get anything and lost to Tonga which should never happen.”