Tennis in 2013 fires up without Roger Federer or Rafael Nadal

With Christmas turkey & plum puddings a weighty reminder of pleasures overdone, the pre-season training is well under way 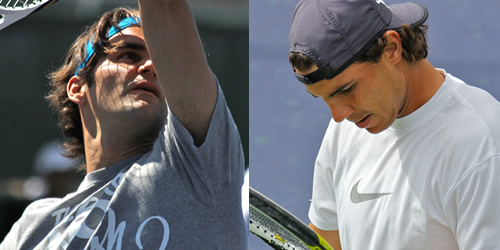 Rafael Nadal (right) will not feature at the Australian Open next month Photo: Marianne Bevis

2012 may not be quite done, but already the work on tennis courts around the world has been cranking up with a vengeance.

With Christmas turkey and plum puddings a weighty reminder of pleasures overdone, the pre-season training blocks are well under way, and most of them are under very un-Christmassy skies—Miami, Dubai or the southern climes of Australia, home of the first Major barely two weeks into 2013.

For the first month of the tennis season is also one of its most challenging, with the run to the “Grand Slam of Asia/Pacific” in Melbourne rearing up from the millpond of December like as tsunami.

The first two Australian Open Series events begin this week: the ATP 250 in Brisbane and the team-based Hopman Cup in Perth. They compete for fans and players with two more tournaments in Chennai, India and in Doha, Qatar.

Even now, a handful of exhibition events has been and gone. The most lucrative and high profile of them, held this week in Abu Dhabi, featured four of the top six ranked men competing for an all-or-nothing $250,000 purse. It was there that defending champion, world No1 Novak Djokovic, prepared for his 2013 campaign in considerable style, beating David Ferrer and Nicolas Almagro.

Andy Murray and Tomas Berdych also got the blue hard courts under their feet in Abu Dhabi, but their ATP season opens in earnest as top seeds in Brisbane and Chennai respectively, while Ferrer tops the list in Doha. Djokovic, though, has foregone ranking points in favour of the company of Ana Ivanovic at the 25th playing of the Hopman Cup.

The second week of January offers a similar smorgasbord of events. There are two ATP tournaments in the Antipodes, one in Sydney—headlined by Jo-Wilfried Tsonga—and the other in Auckland—topped by defending champion Ferrer. Meanwhile at the former home of the Australian Open, down the road from Melbourne, is the eight-man, round-robin non-tour event, the Kooyong AAMI Classic.

What stands out amid this buzz of activity, however, is the absence of two major names.

For the first time since 2008—the year Roger Federer fell victim to a bout of glandular fever—the world No2 is not playing a single event before the ‘big one’ in Melbourne. Indeed, apart from that one Australian summer, it has been nine years since Federer did not play a warm-up event prior to the first Grand Slam of the year. And for the last four years, Federer has played at both the Abu Dhabi showpiece and in Doha—both a short plane ride from his training base in Dubai.

This year, however, is entirely different, though not altogether unexplained. After the World Tour Finals, he talked of how his exhibition tour in South America during early December would both refresh him mentally and also form part of his 2013 training schedule:

“I’ve never been to South America as a professional tennis player… But I made sure I have a two-week vacation before that. So for me that is even the beginning of the build-up and the workouts. And on top of that, it’s a lot of fun. Plus I’m not playing any exhibitions after that, like I have in the past. I’m not playing the first week of the year either. Basically I’ve given myself enough space.”

Because now, with the luxury of enough years and matches under his tennis belt to choose where and how often he plays, Federer can drop events, re-focus on his physical and tactical preparation, and work out fresh goals:

“I first have to make sure I create my schedule so it makes sense for my practice schedule. I need to practise a whole lot more next year [2013], because this year, I hardly had an opportunity to do so. I have some catching up to do in that standpoint.”

Incidentally, back in 2004—the last time he came to Melbourne with no match-play—he won his first Australian Open title.

The absence of Rafael Nadal from every event in the opening weeks of 2013 tells a rather sadder story.

He, like Federer, had played in both Abu Dhabi and Doha for the last four years, but this time, he has been forced to pull out with a stomach virus and, worse still, will not play at the Australian Open.

It is a severe blow for the richest—and arguably the most high profile—of the pre-Melbourne events in Doha. Last year, this oasis of violet, lime and dayglo-yellow marked its 20th anniversary with its stars, Federer and Nadal, playing under the night sky in an arena lit by 4,000 candles.

But for Nadal, absent from the tour with ongoing knee injury since he made a shock exit in the second round of Wimbledon, it is one more set-back that will see him miss his first Australian Open since 2006 and concede his top-four ranking for the first time since May 2005.

With more than a fortnight to go until the Melbourne draw is made, he announced that he is “unable to get ready in time to tackle the rigours of a Grand Slam…My knee is much better and the rehabilitation process has gone well as predicted by the doctors, but this virus didn’t allow me to practise this past week.

“As my team and doctors say, the safest thing is to do things well. I simply would not be doing myself or my friends in Australia justice if I went down there so unprepared.”

So there are different outlooks and different expectations for the two former Australian Open champions who held sway at the top of the rankings from early 2004 until Djokovic won Wimbledon in July 2011.

For while Federer and Nadal won two of the four Grand Slams in 2012, it was Federer who reclaimed the No1 spot for the second half of the year and is clearly aiming to close the gap on Djokovic again with a title-chasing run in Melbourne.

Nadal, meanwhile, will hand over his No4 ranking to compatriot Ferrer—but he has other players to worry about, too, notably two quarterfinalists from last year’s Australian Open. The No6 ranked Berdych and No7 Juan Martin del Potro are separated by just 200 points and will be nipping at Nadal’s heels once his 1,200 points as a finalist in Melbourne in 2012 drop off.

Berdych did not play ahead of Melbourne last year but is the top seed in Chennai this week. Del Potro cannot win points before the Australian Open but, judging by his end-of-2012 results, he is returning to the kind of form that won a Grand Slam before he was sidelined with wrist injury in 2009.

Nadal hopes to begin a comeback on his beloved clay in February but he will have to reclaim his match-sharpness quickly in order to defend the four big titles—and big points—won between Monte Carlo and the French Open. It’s a mountain to climb, especially with two hard-court Masters in March—but if he can do it anywhere, it will be on the red stuff.

Meanwhile, every other man in the top-20 is preparing for the first Grand Slam of 2013 in the next fortnight:

Rafael Nadal pulls out of Australian Open after stomach virus