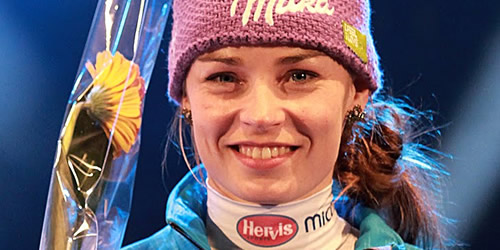 With the ski season now well and truly under way, The Sport Review winter blog is also cranking into gear.

Here’s a look at the weekend’s major skiing action.

Tina Maze continued her exceptional form this weekend at the French resort of Courchevel with yet another Giant Slalom win, her fourth in a row. The Slovenian also set a new national record with her fifth win – more than any Slovenian skier in a single season – with the year barely under way. Austrian Kathrin Zettel and Swiss skier Tessa Worley came second and third respectively, but there was no catching Maze who finished 0.22 seconds ahead of her closest rival.

In the last blog, I mentioned that the resort of Val Gardena in Italy was a personal favourite of mine. Having skied in the glorious Dolomites since pretty much birth, it’s always a delight to see the world’s best skiers flying down the Saslong, a course I have successfully negotiated at painfully slow speed with some precision snow plough turns.

But there was no lack of speed for Aksel Lund Svindal, who continues to crush the opposition on the men’s side of the tour. The Norwegian won Friday’s Super G comfortably before modestly summing up his performance. He said: ‘It was a good race. I don’t know what else to say. Some days are faster than other days and today was fast.’

It certainly was fast – the 29-year-old finished 1.07 seconds ahead of Italian Matteo Marsaglia and 1.12 ahead of Werner Heel, another Italian with a more Germanic name than most of Germany. And Svindal could have been faster but for an error towards the end of the course that almost left him doing the splits.

In Alta Badia, also in the Italian alps, American Ted Ligety won the Giant Slalom with a dominant race. Ligety was 2.04 seconds ahead of Austrian Marcel Hirscher in second with French skier Thomas Fanara in third.

The men’s tour moves on to the beautifully named Madonna di Campiglio this Tuesday with the always popular spectacle of a night slalom.

Departing from the tradition and grace of the World Cup tour, let’s get extreme.

The Dew Tour iON Mountain Championships took place in Breckenridge, Colorado over the weekend, with some of the world’s best racers and riders convening to show off their freestyle snow skills. Britain has never won an Olympic medal on the ski slopes before but, with slopestyle skiing (i.e. flying off huge jumps and doing a lot of spinning, twisting and turning) making its debut in Sochi 2014, there is a chance for some long-awaited ski glory.

In James Woods, Britain has one of the best slopestyle skiers in the world, and the Sheffield-born skier was on form on the Dew Tour entering the final as the top qualifier from the semis. But the favourite could not pull it off in his final run, eventually finishing in 9th place with Australian Russ Henshaw claiming the win. Despite the loss, Woods is definitely a name to keep an eye on over the next few years.

The Canadian ski team have chosen a rather unflattering kit design for their racers this season, so much so they resemble a bunch of mankini-clad men sliding down the mountain. Mostly an off-skin colour grey with black detail, it effectively looks like a boob-tube and thong combination. Below Erik Guay models it mid-flight but, trust me, it looks far worse from the back…