Arsenal transfers: David Villa will not be moving to the Emirates this month, according to Barcelona president Sandro Rosell 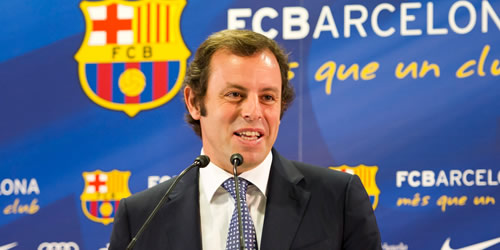 Arsenal target David Villa will not be leaving Barcelona in the January transfer window, according to the La Liga club’s president Sandro Rosell.

The striker, who is Spain’s all-time top goal-scorer, has been heavily linked with a winter move to The Emirates in recent weeks, with Arsene Wenger reportedly keen on adding the forward to his attacking line-up.

The Gunners have already offloaded out-of-favour Marouane Chamakh to West Ham United on loan for the rest of the season.

But Rosell insists that the 31-year-old striker will not be leaving Camp Nou during the current transfer window.

“I completely rule out of the transfer of Villa during the winter market. He is ours and we need him. There is a lot of the season left,” said Rosell.

Villa, who joined Barça from Valencia for £31m in 2010, has scored 40 goals in 97 appearances in all competitions for the Catalan outfit.