Australian Open 2013: David Ferrer will face Novak Djokovic in the semi-finals as reward for his five-set win over Nicolas Almagro 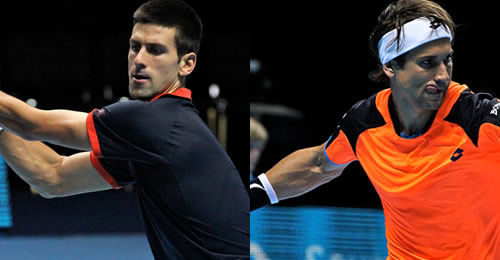 Novak Djokovic will take on David Ferrer in the last four in Melbourne Photo: Marianne Bevis

The first two quarter-finals of the 2013 Australian Open featured two top-10 seeds who faced men they might justly regard as their nemeses.

No10 Nicolas Almagro has spent almost every one of his 10 years on the tour in the shadow not just of one other Spaniard but two—and sometimes three. Nevertheless he climbed steadily through the years and the rankings, overtaking the likes of Fernando Verdasco and Feliciano Lopez in the top 20, and broke into the top 10 for the first time in 2011, the year he won three titles from five finals.

But when it came to Grand Slams, he had never made it past the fourth round except on his favoured clay—until now. He had also never beaten the two Spaniards ranked above him, Rafael Nadal and David Ferrer, and although Nadal was not in Melbourne, Ferrer was. Almagro had played and lost to Ferrer 12 times—and now he faced him in the quarters.

For Tomas Berdych, the task looked just as insurmountable, despite the Czech being, for many, the ‘dark horse’ in the draw.

The Berdych story was not dissimilar to Almagro’s: a sure but steady improvement through his 10 years on the tour. He broke the top 10 briefly in 2007, lost a little ground, and broke back in 2010. He had hovered just below the “big four” ever since.

But luck threw the No5 seed into the same quarter as the man he had beaten just once in 12 meetings, at Wimbledon almost three years ago, Novak Djokovic—Berdych’s worst record against the top four seeds.

But both underdogs had some reason to be optimistic, and for Almagro, it began to look as though his day really had come. He had survived two seeds already, was well rested courtesy of retirement by Janko Tipsarevic in the fourth round, and he took the first two sets against Ferrer in pretty quick order. He took them, too, at the first time of asking in each case, 6-4, 6-4.

Almagro then had the chance to serve for the match at 5-4 in the third but, with a steadily rising error count and his first serve percentage constantly languishing in the 40s, he could not seize his chance and Ferrer turned it around, 7-5.

Worse was to come, as Almagro missed two more chances to serve out the fourth set. It went to a tie-break—and Ferrer chose this moment to win his first tie-break in 14 attempts at Melbourne Park, 7-4.

Now fitness began to play its part. Ferrer is one of the fittest on the tour, and married to an indomitable fighting spirit, the writing was, yet again, on the wall for Almagro. While he began to suffer from cramp, Ferrer still bustled with effort and energy, and converted two out of five break points to take the match, 6-2.

Ferrer said afterwards: “I try to fight every point, every game. I know all the players, in important moments, we are nervous. I know that. I try to do my best. Today I was close to losing, for sure.”

He was close to losing, and there was never any doubt that he did his best, for that is Ferrer’s most potent talent. This time, it took him not just to his first semi-final in Melbourne but his 500th match win—13 years after his first.

His reward was played out a few hours later, and he must have longed for a Czech victory. Ferrer boasts a 6-3 advantage over Berdych, including wins in five of their last six meetings. The Czech, therefore, was the safest ticket to Ferrer’s first Grand Slam final. But it was not to be.

Like Almagro, Berdych had reason to be confident. Djokovic had toiled through over five hours, late into the night, against Stan Wawrinka in the fourth round. In contrast, Berdych had not dropped a set through the entire tournament.

He also had the game, should he choose to use it, to work the same magic as Wawrinka: a powerful serve, a big shot on one wing and competence at the net. What Berdych could not afford to do was play points from the back of the court against a player of Djokovic’s baseline prowess in both offence and defence.

Unfortunately, that is exactly what Berdych did in the first set, and although the Czech is a very big man—just 4cm short of two metres and with strong legs—his serve did not top 130 mph in the match and, in the first set, he came to the net only four times.

So Bercych found himself in a sequence of long baseline rallies but without the variety of angle that had worked so well for Wawrinka, and Djokovic broke in the third game.

Berdych continued to be sucked into the Djokovic rhythm, and was punished with a second break and, for good measure, a third to give the set to the Serb, 6-1, in just 28 minutes.

The Czech, though, appeared to use the thinking time between sets to recalibrate. He began to take the game to Djokovic, twice getting to the net on the Serb serve, and he broke. He continued the pressure with some serve-and-volley moves, asserting his two-game lead to the end. Serving at 5-4, Berdych’s mental fortitude was severely tested, but he withstood four break points for the set, 6-4.

It begs the question, therefore, why the Czech then reverted to the same pattern of play as in the first. It amounted to an open invitation to Djokovic to reassert his authority. Perhaps Berdych was worried by an early drop-shot-lob combo from the Serb, but after making 10 winners from 13 net approaches in the second, Berdych dropped to just four from six in the third. It was a fatal move that, allied to some pin-point and clinical hitting from Djokovic, saw the Czech broken twice and down another set, 6-1.

Now Djokovic was in full flow, defending superbly and moving Berdych on a piece of string across the baseline. The Serb broke at the start of the set, held with ease to 5-4, and served out on his third match point, 6-4.

Djokovic looked relaxed, full of running and confident after his two-and-a-half hour win:
“I was hoping to have a shorter match…I was aware of his qualities and I came out and played my best tennis.”

That, of course, is the mark of a winner. Perhaps it took his severe test in the fourth round to galvanise Djokovic’s best form, but in his ruthless performance against Berdych, everything seemed to play itself into fine working order, and with perfect timing to take on Ferrer.

Djokovic beat the Spaniard here in the quarters last year, 6-1, in the third set, and it’s hard to see a significantly different result this time round.