Australian Open 2013: Another name will take his place in the top four rankings after the year's first Grand Slam in Melbourne 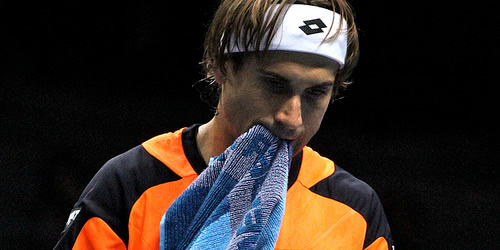 David Ferrer was rewarded in 2012 with perhaps his best year ever Photo: Marianne Bevis

So commonplace has the shorthand phrase ‘the Big Four’ become in talk of the best known quartet in tennis—Novak Djokovic, Roger Federer, Rafael Nadal and Andy Murray—that even armchair experts used only to watching tennis four times a year can quickly reel off their names.

It’s easy to see why: Since the Australian Open in 2005, all 31 winners but one have come from these four. They have also hogged the top four places in the rankings: Federer hasn’t been outside the top four since July 2003; Nadal has resided there since May 2005; Djokovic joined the party in June 2007; and Murray has been there since September 2008, slipping to No5 for only 13 weeks.

For four-and-a-half years, then, it’s been a rare beast who has broken in—and it’s been a short-lived stay.

But that is about to change. Another name will take his place in the top four rankings after the Australian Open, and it will not be a name with a new face nor a young pair of legs. It will belong to the man who was supplanted by Murray back in September 2008: David Ferrer.

It would be easy to dismiss what, on the surface of things, seems a minor shift—perhaps even a temporary shift—in the order of things. Nadal has been missing from tennis since his loss at Wimbledon last year, nursing long-term knee problems that have prevented him from playing two consecutive Grand Slams. And by missing the current Major in Melbourne, he has forfeited the points he won in last year’s final—and with them, his place ahead of Ferrer.

But there are few—with Nadal no doubt among them—who would begrudge one of the most respected men in tennis his place among the elite. At the very least, it accords him his own quarter when it comes to the Grand Slams. At best, it gives recognition to one of the biggest hearts in tennis, a man who at 30 has continued to grow in stature and improve in performance.

When he first turned pro at the start of the century, his prowess was on clay —not unusual for a man raised and trained in Spain. The titles took a while to materialise, but when they did, they came almost as often on hard courts, and in his first Masters Cup, played on the hard courts of Shanghai, he reached the final.

On into 2008, he took his first grass title. In 2010 and 2011, having contemplated retirement when his ranking and confidence slipped from No4 to outside the top 20, he reached the finals of three Masters. Instead of walking away, he grabbed back a top-10 place, ended 2010 at No7 and 2011 at No5.

Still he was not done, improving his game at the front of the court, developing a bigger serve and becoming one of the fittest man on a tennis court.

He was rewarded in 2012 with perhaps his best year ever. By the start of the final Masters of the season in Paris, he had accumulated six titles and, by the end, he had won his first ever Masters title—the only man since Paris two years before not called Federer, Djokovic, Nadal or Murray to win one of the prestigious 1000 tournaments.

In 2012, Ferrer also posted better Grand Slam results than ever before, reaching at least the quarters of all four for the first time and making the semis on the French Open clay and the US Open hard courts.

He was unfortunate not to make the semis at the World Tour Finals in London, as he had done the year before: He did, after all, win two of his round robin matches. Even so, he ended 2012 with more titles and more match wins than anyone on the tour, and ended his season with straight-sets wins in both his Davis Cup rubbers.

Yet Ferrer seems still to go from strength to even more strength. He came to Melbourne with more matches won than last year, reaching the semis in Doha and then defending his title in Auckland.

Headlining the second quarter of the Australian draw, he can avoid Djokovic—who took him out in the quarters last year—until the semi-finals. And there is every sign that he will reach that stage if his performances so far are any guide.

Ferrer reached the fourth round with a spectacular display against Marcos Baghdatis. The Greek Cypriot No28 seed played to a high level, but whether it was on serve or on return, on forehand or backhand, attack or defence, Ferrer played the better game. He scored more winners and made fewer errors, he won 16 points at the net and 70 percent of his first service points—and 65 percent of his first serves were in. Baghdatis can be a creative player, but he smiled in disbelief at some of the shots Ferrer made.

In short, the busy, bustling, intense Spaniard has become so much more than a brick wall—the term used, along with terrier, to describe the Herculean task of winning points against him.

Yes, Nadal’s absence has given Spain’s No2 a timely leg-up, and Ferrer’s fitness, persistence and speed have all played their part in propelling the self-effacing world No5 into the top four. But that is to underplay his smart tactics and his willingness to inject more pace, more variety and more attack into his game.

Ferrer has, as a result, become one of the most watchable players in men’s tennis, and the opponents in his path to the semis will help to crank up the entertainment factor beyond even what Baghdatis supplied.

Next is No18 Kei Nishikori, another player with all-court skill and speed who beat Ferrer at the London Olympics. Next could be No8 seed Janko Tipsarevic, competing with Ferrer in stature, work ethic and his dogged refusal to give up any ball. Their quarter-final meeting at last year’s US Open was one of the matches of the year, a five-set, blood-on-the-court contest that went to Ferrer in the final tie-break.

The Serb has shown all his fighting spirit to get thus far, reaching the fourth round of the Australian Open for the first time in his career after beating No32 seed Julien Benneteau, 3-6, 6-4, 2-6, 6-4, 6-3.

In the first round, he had to play crowd favourite Lleyton Hewitt, winning in three tough sets. Next came Lukas Lacko, who fought back from a two sets down to push Tipsarevic to five sets in a four-hour marathon.

Tipsarevic will pay heed to Ferrer’s words ahead of his own fourth round match against No10 seed Nicolas Almagro, but even more so if he faces Ferrer in person once again:

Yes, Ferrer will be fast in his legs—and a whole lot more. After all, he does have an appointment with ‘the Big Four’.