Australian Open 2013: Maria Sharapova is beaten by China's Li Na in straight sets in the semi-finals at Melbourne Park 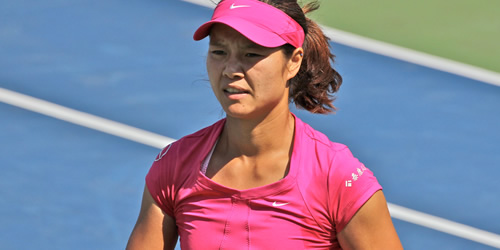 With the shock exit of Serena Williams from the top half of the draw in the quarter-finals of the Australian Open, the door seemed to swing wide open for the No2 seed, Maria Sharapova.

Instead of facing a woman who had beaten her in every match since 2004—10 straight times—Sharapova was likely to face the defending champion, Victoria Azarenka. True, Azarenka had a marginal lead in their head-to-head, but Sharapova had beaten her in their last match, at the WTA Championships.

But that scenario did not take account of the No6 seed and former Australian Open finalist, La Na.

For the Chinese woman, it seems, timing has been everything, and her steadily improving form through the tournament had taken out an increasingly impressive run of seeds: No27 Sorana Cirstea, No18 Julia Goerges and the form player of 2013 thus far, No4 Agnieszka Radwanska.

Li did not drop a set, and the impact of her new coach, Carlos Rodriguez, was beginning to show. She came to Melbourne with the title in Shenzhen and a semi finish in Sydney, and looked fit, strong and confident.

Even so, her task looked near-impossible. Not only did Sharapova have the upper hand in the relationship— Sharapova led their rivalry 8-4, and all four of those losses came while she was still dealing with her shoulder problems—but her form and her progress had been the talk of the tournament: Five matches played, nine games dropped, a scant five and a quarter hours on court, records falling all around her.

What’s more, victory over Li would be Sharapova’s 40th in Melbourne, where she had reached the semi-finals five times, winning in 2008, and would keep alive her prospects of reaching No1 in the rankings.

But after 93 minutes of play, Sharapova had conceded more games in this one match than in her previous five combined, had made 32 unforced errors, six double faults and converted just one of seven break points.

In contrast, Li’s naturally aggressive game was working to perfection—honed, perhaps, by sterner competition in the earlier rounds. Her crisp ground strokes, accurately placed and with real zip, moved her opponent mercilessly across the baseline, depriving Sharapova of time and rhythm, and she broke in the opening game of the first set.

It took Li a little longer in the second set—she broke in the fifth game—and Sharapova could not convert a break chance in the next. Li broke again, courtesy of three straight errors from the Russian, and served herself into her third Grand Slam final with a resounding, 6-2, 6-2 scoreline.

Sharapova afterwards summed it up succinctly:

“I think she played a really great match. She was certainly much more aggressive than I was, dictating the play. I was always on the defence.”

The late-blooming Li, who will turn 31 next month, has lost none of the youthful looks and personality that charmed the world when she reached her first final here two years ago.

“I don’t know what happened today. I just came to the court feeling like, ‘Okay, just do it.’ Yeah. We had a lot of close games. Before I would get angry or something in those moments, but this year I’ve tried to cool down on the court. Like Hollywood—you don’t have to show your opponent what you’re thinking. It’s a little bit like Hollywood, but not real.

“My first time in a Grand Slam final in 2011, I was a little bit shocked. I didn’t know what to do. No one told me what to do on the court. And two years ago I was the first player from China to do these things, so everyone was so excited—maybe now it’s not so interesting anymore.

“But this time should be better. What should I worry about? I worked so hard in winter training, and now everything is coming back to me. I’ll come to the court, take the racket and enjoy the tennis.”

She was wrong about one thing. Li is one of the most watched tennis players in the world, and this is, after all, the Grand Slam of Asia Pacific—as close as China has to its own Major.

But she was right about another: She has worked hard and, with perfect timing, everything is coming back. She will pose a considerable challenge to Azarenka, who beat Sloane Stephens in the other semi, 6-1, 6-4.

The top seed sailed through the opening set in just 33 minutes and led 2-0 in the second, only to see Stephens stage a fight back with the same great ground-strokes and net skills that upset Williams in the quarters. But Azarenka contained the surge, and having missed five match points, took the 68-minute second set to seal her place in her second straight Australian final.

The women’s final will be played on Saturday evening—the equivalent of 8.30am on Sunday in the UK.