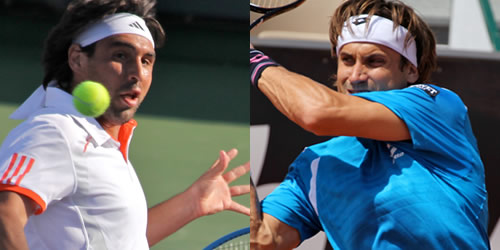 Marcos Baghdatis and David Ferrer were both victorious on day one in Melbourne Photo: Marianne Bevis

The schedule for the opening day of the 2013 Australian Open was sure to appeal to this most passionate of sporting cities.

For while superstars Maria Sharapova, Novak Djokovic, Na Li, Venus Williams and more filled the bulging daytime order of play—and these four sailed through to Round 2 in effortless style—a pair of home favourites opened up the two evening sessions.

On Rod Laver was Australian veteran, Lleyton Hewitt, playing here for the 17th consecutive time. In all those years, beginning as a 15-year-old in 1997, he had advanced beyond the fourth round only once, when he lost to Marat Safin in the 2005 final.

Last year, back for the 16th time in a career blighted by injury and surgery, this warrior of players beat both Andy Roddick and Milos Raonic to reach the fourth round, and then lost to eventual champion Djokovic in four sets. But after toe surgery, Hewitt battled from outside the top 200 to end 2012 at No83.

He was drawn this year against No8 seed, Janko Tipsarevic, and the late-maturing Serb had never gone beyond the third round in Australia. An upset was entirely possible, especially as Hewitt came into the tournament on a wave of wins at the Kooyong Classic exhibition event last week, beating Raonic, Tomas Berdych and Juan Martin del Potro for the loss of just one set.

So while the No4 seed, David Ferrer, played to a near-empty Hisense arena—he overcame a spirited Olivier Rochus in three sets—the fans were out in force on Melbourne Park’s biggest arena as the sun and the temperature dropped.

As expected, the two were nip-and-tuck through a 69-minute opening set. Hewitt played 10 more winners but also made a dozen more errors than his opponent and Tipsarevic edged the tie-break, 7-4.

Hewitt hit back fast to break in the first game of second set—and then broke again, tracking down the Serb’s baseline shots to force a scattering of errors. His terrier-like retrieval earned a 3-0 lead.

Tipsarevic, though, regained his focus—one of the most improved parts of his game in the last couple of years—and broke back with a stunning backhand winner down the line. Hewitt held off more break points to maintain a 5-3 lead but Tipsarevic started to find a real groove, and the same backhand produced more devastating winners. It earned him another break point to save the set, Hewitt over-pressed and they were all square, 5-5.

A love service game from Tipsarevic contrasted with a Hewitt first serve that began to waver. The Australian rushed the net, only to see another searing Serbian backhand shoot down the line—and one more sealed the break and the set, 7-5.

Tipsarevic had turned the momentum squarely in his favour and although he fluffed first a backhand and then a forehand on break points, he was offered another opportunity from a Hewitt double fault. Yet again, the Tipsarevic backhand did the business to break. He went 3-0 up with a magical top-spin lob winner in what was proving to be a classy display of tennis.

But Hewitt is not a man to give up. He held his next serve and then harried the baseline, picking up near-impossible shots, to break back, and Rod Laver went wild—especially when Hewitt held to level 3-3.

This match, though, was already 2hrs 45mins old and while Tipsarevic looked strong and fresh, Hewitt, perhaps now feeling those matches at Kooyong in his legs, seemed to find the going tougher. Sure enough, the Serb attacked again—the difference between the two summed up in their winners, four to 14 in Tipsarevic’s favour—to force a break in the eighth and he served out the match, 6-3.

The crowd was left to applaud Tipsarevic, who has won a big following on the tennis circuit not only with his clean and energetic tennis but also with his wit and articulate charm. He has a decent draw, too, so may this time get beyond the third round for the first time. The locals will, it seems, be more than happy if he does.

Another ‘Mr Popular’ provided the entertainment for the alternative 7pm match in the Margaret Court arena, a man who played one half of a memorable 2008 battle with Hewitt himself. Back then, Marcos Baghdatis lost out to the Australian in the latest match ever played in Melbourne, 4.33am, after little short of five hours and five sets.

This time, the Greek Cypriot played the No51 ranked Spaniard Albert Ramos. On paper, there was not much between them—20 places—and they had never met before.

The crowd was vociferously behind Baghdatis, for there is a huge Greek community in Melbourne, and this Grand Slam has been his most successful—he reached the final in 2006.

The first set encapsulated what became another battle royal for Baghdatis, with swinging fortunes, outrageous winners and strained bodies. They exchanged breaks of serve on their way to a tie-break, all square on points, but Ramos stormed through, firing one forehand winner after another, to whitewash the deciding 13th game, 7-0.

The difference in the second set, where they again exchanged breaks, was the serving of Baghdatis. His percentage rose from 34 to 66 percent scoring eight aces. Again, it was decided by a tie-break, again their stats were almost identical, but this time it went to the Cypriot, 7-4.

The pressure now began to tell: After more than two hours on court, Baghdatis disappeared for a ‘comfort break’ and the left-handed Ramos called the trainer for some attention to his right arm.

Come the mid-point of the third set, the seventh game looked pivotal as Ramos fended off some incisive winners from Baghdatis. On the third break point, the Cypriot hit a backhand down the line in one of the rallies of the match, and the crowd went wild. Baghdatis, ever the showman, raised his arms in celebration.

However, Ramos hit back to earn three break back points, 0-40, before the pumped up Baghdatis made five straight points—two with aces—to keep his lead. He took the set, 6-4, 14 winners to 5.

Now it was Baghdatis who started to look battle-worn, stretching out his back during the long break before the fourth set. He went down 3-1, broke back, and barely survived five break points in the demanding sixth game.

Ramos now looked the fresher, held serve to love, and broke in the next. He served out the set, 6-3 to level the match. The fifth set, it seemed, may come down to energy and crowd support.

It was the Spaniard’s legs that started to buckle first. His forehand that had been so strong earlier in the match began to let him down and he was broken. Baghdatis, buoyed up by his supporters, found a second wind to take a 4-1 lead, and a love service game consolidated a 5-2 advantage. After almost four and a half hours, Baghdatis passed the winning post, 6-3, yet they were separated by a single point—and despite losing, that point belonged to Ramos, 186 to 185.

Though this was an uplifting win for Baghdatis, it will signal problems should he reach the third round, where the tireless Ferrer is likely to wait. The man who will be the top-ranked Spaniard after this tournament will not run out of energy. As he said afterwards: “That’s my game, to run a lot.” These days, it’s an awful lot more than that.