Australian Open 2013: Novak Djokovic battles past Stanislas Wawrinka in a five-set epic to book his place in the quarter-finals 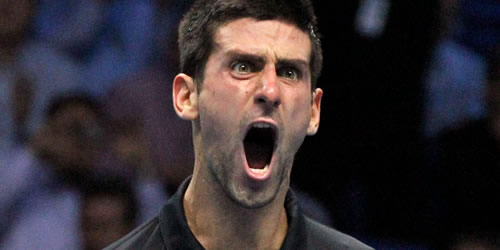 The Australian Open had narrowed its 128 men down to the ‘Sweet 16’ who would contest a quarter-final place in the second week of the sunshine Slam.

It was Sunday night, and fans packed Melbourne Park for one of the best days of the tournament. There had been upsets en route to the fourth round, especially in the top half of he men’s draw that would take centre stage first, but only one of the eight slots was not filled by the scheduled seed—and Kevin Anderson had only missed seeding by a couple of ranking spots.

By the time the star of the day, defending champion Novak Djokovic, appeared, No4 David Ferrer had continued his near-effortless progress, as had Tomas Berdych, while No10 Nicolas Almagro had overtaken No8 Janko Tipsarvic via retirement. It just required No1 Djokovic, who had been largely untroubled by his first three opponents, to beat No15 Stanislas Wawrinka to send everyone home happy.

Few of the 15,000 who settled back for the show expected the most dramatic match of the tournament and one of the most consistently high quality displays of tennis for many years. Yet Wawrinka, and perhaps the men he had beaten with ease, unheralded, to reach his allotted place, may have expected otherwise: the likes of No20 Sam Querrey and one of the fast-rising stars, Cedrik-Marcel Stebe.

For the Swiss man who has spent a lifetime in the shadow of Roger Federer paid no heed to the rankings, nor to his opponent’s title-winning run in Australia, nor to their previous record. He had not beaten Djokovic in 10 matches since 2006 and had not won a set since 2009, but the last of those was quickly to change.

Wawrinka won the first point of the match, and then a couple more to push Djokovic to deuce in the opening service game, before a couple of early aces from Djokovic ensured a hold.

But what became fascinating in these early stages was the intent of the Swiss. It was aggressive, and he was in to the net on his own serve as soon as his much-admired single-handed backhand opened the opportunity.

He also used that swinging, powerful sweep of a backhand to force errors from the Djokovic two-handed version, and it brought a surprising break of the Serb’s second service game.

He was not done, either. A sizzling forehand return of serve onto the baseline brought another break point on Djokovic’s next serve and an acute backhand zipped beyond the sprinting legs of Djokovic for a second break and a 4-1 lead.

Wawrinka had worked himself into that happy place, ‘the zone’, and Djokovic raced, reached and slipped around the court to no avail. Serving a third time, Djokovic yet found himself facing break point again courtesy of a skimming backhand, and Wawrinka pounced on a second serve to take game and set, 6-1.

The Swiss had clocked up nine winners and just three errors to Djokovic’s five and 11, and had more than twice as many points to his name. This was far from the expected script, unless you were Swiss.

For Wawrinka was playing under the watchful eye of Severin Luthi, Federer’s friend and part-time ‘coach’ who has been doubling as the Swiss No2’s coach. Which of them decided that Wawrinka deserved the shoe branding normally reserved for champions, who knows, but rather cheekily, there on his heels, was the Swiss cross and Wawrinka’s moniker: “The man”.

He continued to be “Stan the Man” in the second set, too. He lost serve in the opening game, but recalibrated his serve to well over 130mph and the ‘old faithful’ backhand forced more errors from Djokovic. The Swiss broke back.

Djokovic seemed to have trouble keeping his footing—and his infamous retrieval skills always test his shoes to the limit. But after three games, he changed one set of silver footwear for another. He was broken again, leaving Wawrinka to serve for the set at 5-3, but there was already an ominous sign of a momentum shift.

Through a flurry of testing baseline exchanges, the errors piled up on the Swiss side and the Djokovic defence hit its stride. The glint was back in Djokovic’s eyes: He had no intention of going two sets down. Sure enough, he broke and went on a tear to win the second set, 7-5.

How different things suddenly looked. Athough Wawrinka still led on the winners count by a huge margin, he had made twice as many errors as Djokovic, 25 to 10, in that set.

The Serbian storm continued with a break in the first game of the third. His roar and pump were worthy of a match-win, and Wawrinka’s reaction to the celebration was icy, and perhaps needled him into an immediate break back, but it was clear who now had the edge. With precision timing, Djokovic broke in the ninth game and served out the set, 6-4. They stood all square on points, but Djokovic looked ready to roll.

Wawrinka, though, was not done. He fought like a lion, went for his shots, attacked the net, and moved around the court perhaps better than he ever has. It demanded Djokovic’s best to survive a break point in the opening service game and another in the second as Wawrinka continued to pile on the winners—eight more than Djokovic in this set. As they headed to a tie-break, Wawrinka had treatment on his groin: They were three hours in, and Wawrinka needed every bit of help he could get against one of the fastest, fittest men on a tennis court.

The two men had played six tie-breaks before, and Djokovic had won all of them. This time, he would not. Wawrinka opened a 4-1 gap, saw it pegged back to 6-5 but played a text-book one-two—a wide backhand followed by a winning forehand—to level the match. The crowd roared their approval as an evening’s entertainment became a night-time spectacle. All Wawrinka could do was sit and gaze in disbelief at his box. The gaze almost became a smile

The final-set drama began immediately with two breaks of serve. Djokovic faced two more break points in the third but survived with some extraordinary defence.

By 3-3 and 154 points apiece, cramp began to take hold of Wawrinka and he hit his first double fault of the match. Four hours down, and the Swiss was break point down, but he survived again, only to earn three break points against Djokovic in what would prove to be the pivotal ninth game. If Wawrinka could break, he would serve for the match, but his stiff legs and tired right arm could not contend with some timely drop shots from Djokovic. It took nine minutes, but the Serb held.

They were still locked together, 6-6, after an hour, and still at 10-10 after almost 100 minutes. Wawrinka always trailed, so when he faced the first deuce since 4-4, every Swiss heart missed a beat. It took Djokovic three match points, but right on cue, he produced a backhand cross-court winner worthy of the man across the net.

Djokovic roared and ripped open his shirt in a replay of his celebration after beating Rafael Nadal last year. Wawrinka wiped away the tears.

It had taken more than five hours, yet a near-full Rod Laver arena, at 2am, rose to acknowledge not just the victory but how they had played the game. For Wawrinka, the quality and drama of the match may eventually ease his loss—but not yet.