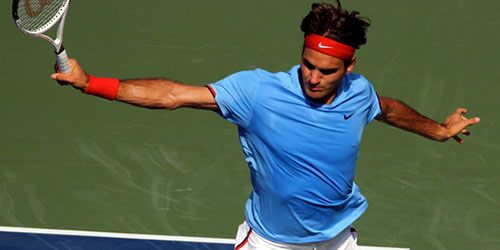 There are some tennis players and some match-ups that just get the blood racing.

They might be the shot-makers, perhaps the ones with serve-and-volley flair, or maybe the ones whose passion to win shines as much in their outrageous defence as in their bold attack.

Sometimes, the excitement builds out of deep-running rivalries or contrasting styles of play and personality. Occasionally it can be something as intangible as charisma.

In the case of Roger Federer and Jo-Wilfried Tsonga, in the last quarter-final match of the 2013 Australian Open, it was a combination of everything.

Both good-looking men with good-looking tennis, and both able to mix touch with power, their matches have invariably been close and compelling, popular with fans and even with hard-nosed media.

There is also some back-story to their rivalry. Tsonga is one of only three men to have beaten Federer in a Grand Slam quarter-final, and he did so from two sets down at Wimbledon in 2011. He went on to win at the Montreal Masters before Federer took some revenge at the WTFs: two wins both needing deciders.

They had not met in 2012, but did spend time together in December on tour in South America—“hanging out” as Federer put it. They clearly had fun, clearly get on, and always put on a show, whether in exho mode or serious competition.

Tsonga, a top-10 presence for most of the last four years, even pressing into the top-five for part of 2012, came to Australia with a new coach, too. Three times a Grand Slam semi-finalist, Tsonga has been looking for that extra step and turned to Roger Rasheed to help him.

The Frenchman already looked leaner and meaner in his strong wins so far in Melbourne. Little surprise, then, that this was perhaps the most eagerly anticipated of the quarters.

The hopes of the packed Rod Laver arena were fulfilled immediately, both men keen to attack the net on Tsonga’s opening serve. It was fast and furious, and some eager hitting from Federer got an immediate break. However, Tsonga continued to apply pressure though short and long exchanges, making some forehand winners worthy of Federer himself. He broke back.

Perhaps it was the pressure of the constant attack from his opponent, but the error count from Federer climbed higher by mid-set than in his entire match against Milos Raonic. His first serve success barely reached 50 percent, too, but he stayed with Tsonga to force a tie-break.

The deciding game was nip and tuck, the difference decided on Federer’s side by an ace just catching the centre line and a net-skimming backhand on set point.

The second set was decided rather faster. Federer could make no inroads against Tsonga, with the Frenchman dropping just two points on serve. In the fourth game, a bullet-fast exchange from the baseline drew a Federer error on break point and Tsonga went on to serve out the set, 6-4, in just 32 minutes.

The start of the third continued to mix flashes of brilliance and nerve-jangling moments for both men, and where the safe money would usually favour the ultra-cool Federer against the more unpredictable Tsonga, there was some steel inside the fire of the Frenchman—perhaps the effect of some tough tuition from coach Rasheed.

So although Federer broke the opening serve of Tsonga with a swift chip-and-charge winner, he was forced into three straight errors from the baseline in the next and Tsonga broke back.

The set built towards an climactic tie-break, with both playing at the their peak: now a fast backhand exchange, next a running winner, punctuated with numerous forays to the net—11 from 13 for Federer alone. Little wonder that, with the same number of winners on the board, both were stained dark with sweat.

Just as in the first tie-break, Federer edged a point advantage, and a backhand winner down the line for set point drew an impassioned roar from the Swiss. Another backhand, angled away from the racing Tsonga, took the set, and this time, the roar came from crowd.

Despite a 2-1 deficit, the steel of Tsonga remained intact. He opened the fourth with a glittering hold, staved off five break points in the next, and let loose against the Federer serve to break in the sixth. Still the high-octane tennis flowed, played at break-neck speed, and Tsonga found winner after winner—the last a reactive volley—to break, and he served out, 6-3.

Here, then, were recollections of the outstanding tennis that took Tsonga past Federer at Wimbledon. The Swiss had done nothing wrong here, just as then, but was experiencing a little of what he meted out to his previous opponents. The Frenchman’s momentum and flow looked impossible to stem.

Yet they were, helped by one poor service game in the fourth from Tsonga and some energised net attacking from Federer. With a 4-1 lead, the Swiss ran, fist-pumping, to his chair.

So it was a galvanised Federer who now pinned down his serve, won 14 points at the net, and conceded no break points. There was even room for a smiling exchange when even the net joined the party on the Federer side.

The match was worthy of a replay for its penultimate game alone, eight minutes of exhibition-style points, played at full throttle. The Frenchman held and pounded to a 30-15 lead on Federer’s serve, but the Swiss ended with an appropriate flourish for a match boasting more than 100 net points—a big overhead smash.

If anyone doubted the affection these two rivals have for each other, it was soon dispelled by a warm embrace and warm words exchanged to the soundtrack of a roaring Rod Laver arena. And Federer affirmed:

“I feel a bit lucky to come through but I felt we played some great tennis: It was a pleasure to play Jo.”

Andy Murray, who many expected to contest the toughest quarter of all when he was drawn with Juan Martin del Potro, was as little tested by Jeremy Chardy as he was by most of his previous opponents.

Murray’s straight-sets, sub-two-hours win set up a 20th meeting with Federer—his first in Melbourne since losing the final in 2010. One suspects this one will be a whole lot closer.