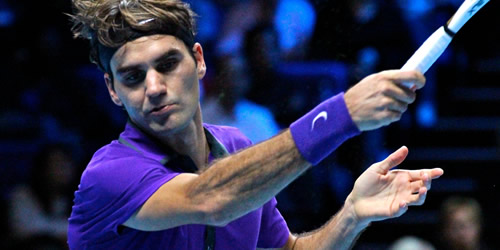 And so the Roger Federer storm continues—though as storms go, this has had the silky touch of Europe’s January snow rather than the hurricane blasts that sweep North America during New York’s tennis jamboree in September.

Even before he took to court for his fourth-round match on a cool Melbourne evening, Federer had neither dropped a set nor his serve during the tournament.

However, most expected that at least one of those would go when he took on the formidable 22-year-old figure of Milos Raonic, a rising star ranked close to the top dozen.

Certainly the Canadian hurricane had proved his worth in their previous three meetings, all last year and all going the distance. Indeed two of their matches were decided—in Federer’s favour—by final-set tie-breaks.

The first thing that favoured Federer was the coin toss: He would at least start the match on serve against the man with both the record for aces—71—and the record for serve speed—142mph—in the tournament.

And Federer held his opener comfortably before facing an opening 147mph delivery from Raonic. The Canadian even hit a second serve at 128mph, but this young man has more in his box of tricks than a big serve. While he opened with a bullet winner, he closed his first game with an exquisite angled touch volley.

Federer, of course, is no mean server himself, deploying less speed but great disguise, angle and spin to befuddle his opponents. He threw in four aces of his own in the opening half dozen games and got enough racket on the Raonic serve to work three break points. Needless to say, three big serves saved the situation: Federer would not be able to squander as many break points against such serving as he had in his previous matches—23 in the last two alone.

But by 5-4, Federer had only dropped two points on his serve and now had the chance to capitalise on one more break point. And when it really mattered, he took it, withstanding pressure on his backhand before driving an angled top-spin from the same wing towards a net-rushing Raonic.

The Canadian netted his volley and Federer led, 6-4, having made just one unforced error in 32 minutes of highly-focused concentration.

The timely break meant Federer also served first in the second, a still closer set as the Canadian cut down his error count and upped his first-serve percentage. But by 6-5, Federer had dropped only two further points on serve and was placing an impressive 74 percent of his first serves into play.

Even so, he could not get enough purchase on the Raonic game to earn any break points. It would go to a tie-break…and a test of which man’s serving performance was the better.

Suffice to say that Federer conceded no more points on his serve to the set’s end, a calm, crisp and super-quick 7-4 sweep to a two-set lead. And his match stats after 78 minutes and 23 games were remarkable: just four points dropped on serve and just four unforced errors.

When Federer took the second set with a winning forehand down the line, he allowed himself a rare emotional release—a huge roar towards his box. A sign perhaps of how tightly wound his concentration had been, and a chilly warning to Raonic.

With some pressure taken off, it was perhaps inevitable that Federer’s grip on the stats would slip just a little. His first serve level dropped to around 50 percent while that of Raonic continued to rise, yet the Swiss still struck with a killer punch: Four extraordinary returns of serve, four straight points, and a break to love.

A more relaxed Federer now allowed some rallies to develop, dropped a few more points, gave his drop-shot an airing—one of them cheekily played off a return of serve to devastating effect. In contrast, Federer faced deuce only once and not a single break point in the match. He caught out a net-bound Raonic with a backhand return again, and broke a second time.

The Swiss never looked back. He took the set and match, 6-2, and even had the time and inclination for some on-court banter with Jim Courier—the best interviewing double-act in tennis,

How did Federer return Raonic’s serve so well?

“I have good reflexes!”

What was the reason for putting on the extra vest after the second set?

“I put it on because I have big muscles: I have to keep them warm. It’s particularly my big left arm that’s so impressive, that’s what shocks all my opponents when I walk out, that big left arm tossing the ball: It’s scary!”

Of course the relatively slender left arm, used neither on forehand nor backhand, is the least muscular part of the Federer game. However, the rest of his game has looking very muscular.

The Swiss is famed for his attacking mindset, his all-court offensive skills and clutch serving. Those played a huge part in his win today but the ease of his win was down to the other half of his game: outstanding defence, a super-fast reaction to a super-fast serve, and smart tactics—keeping the ball low and angled to trouble the huge frame of the Canadian. Time and again, that was enough to open the court for a put-away winner.

Mix in some great concentration and what looks like serious time in the gym and on the practice courts, and it is a finely-honed Federer who has marched into his 35th consecutive Major quarter-final.

His rivals remain daunting in what has been a challenging draw. Up next is No7 seed Jo-Wilfried Tsonga, who is also playing freely and has beaten Federer before, most importantly in the quarter-finals of a Grand Slam, and Wimbledon at that.

Then comes Murray, enjoying an easier road to the semis than anticipated, his only seeded opponent a battle-weary Gilles Simon who looked barely able to put one foot in front of the other in their fourth-round match.

Even so, it will be a brave man who bets against the four-time Australian Open champion in his current form: Federer is up for this one, big time. Should he go all the way to the title, and see Novak Djokovic, who took five hours to get through his own fourth-round match, fall to a fresh Tomas Berdych, Federer could even reclaim the No1 ranking.