Australian Open 2013: Federer in the pink for 20th Davydenko face-off

Australian Open 2013: Roger Federer eases into round three with a 6-3 6-4 6-4 victory over Russian Nikolay Davydenko 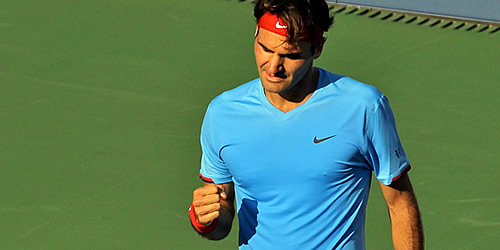 It may have been early evening in Melbourne but the temperature was still scorching—40 degrees and too early yet for the local crowds to pack out the Rod Laver arena.

This was one of the Australian Open’s most highly-anticipated second-round matches, the 20th meeting between two old adversaries, both 31 years old, separated by just two months: Roger Federer and Nikolay Davydenko.

The empty seats soon filled, and not a moment too soon for, as usual, both men stepped inside their baselines right from the off. The ball flew, their feet flew, and the rallies crackled through every point. By 2-2, they had both defended deuces on serve and both had 17 points. With neither prone to wasting time between points, it was hard to see how they could both maintain such a crisp-hitting pace.

It became clear that Davydenko had brought to court the form that had taken him to the Doha finals a fortnight ago. He had also beaten Federer there in 2010, and although he had not beaten the Swiss since, he came achingly close in their last meeting, in Rotterdam, less than a year ago.

Federer faced deuce again as Davydenko forced his opponent’s error rate up to 12. The sixth game also went to deuce, and Davydenko faced off two break points with his pacy angles, but on the third, Federer broke through for a 4-2 lead. With that, Federer played the best service game of the match so far, boasting two wide-angled aces and a volley winner, for a 5-2 lead.

Still Davydenko fended off the onslaught from 0-30, and then two more break points. Federer was forced to serve it out—and he did so to love, 6-3.

After sporting a tried-and-tested look for his first match of the tournament—a standard sky-blue with white combo—Federer had upped the stakes on the sartorial scale for his first evening match.

His shirt had switched to silver-grey, complemented by charcoal shorts, socks and bandana, but the look was boldly lifted not with the bright yellow favoured by the majority of players this year, but by brilliant fuchsia pink.

With the temperature still at 39C, though, the silver grey had now deepened to the colour of steel, and with a hard 42-minute set in the bag, there was some steel in his shot-making, too. The rallies were still crisp but now rather shorter, and though there was little wrong with Davydenko’s play, Federer broke at the first time of asking. However, the Russian survived another break chance on his next serve and began to up the pace again.

The tempo of the rallies ensured there were errors on both sides but Davydenko’s serve hit a purple patch, too, outpacing Federer’s at 130mph, and out-acing the Swiss in the second set, 7-3. He took Federer to deuce in the eighth game, only to twice miss the baseline by a fraction on his forehand, and the Swiss held for a 5-3 lead.

As in the first set, though, Federer could not convert two break points for the set. Davydenko continued to match the Swiss on winners, 10 apiece, but even so, the Russian could not work a break point—Federer was, after all, serving at 84 per cent. The second set was concluded in near-identical style to the first, in 42 minutes, one break, and the set to Federer, 6-4.

Davydenko’s frustration was palpable: He lost the first four points of the third set, the last of them a double fault, to concede an immediate break. But just as in the first two sets, he quickly refocused and pounced on the Federer serve to go 30-0 up, and missed earning three break points by a fraction when he put a forehand just wide of the line.

Federer survived to consolidate his lead, 2-0, with a running backhand winner and a drop-shot. And even with the Federer serve plummeting to 44 per cent for the set, Davydenko could not work a break point. The Swiss, though continued to miss the break chances he was offered. Instead of taking a 4-1 lead, he played a poor forehand into the net on his 13th break point to keep Davydenko in touch, 2-3.

But despite all the Russian’s efforts—and there were bold attempts at the net and sequences of quite brilliant forehands from inside the baseline—Federer maintained that safe distance all the way to the match’s 6-4 conclusion.

This was a good display from Davydenko but his all-or-nothing shot-making, always a pleasure to watch, again fell short in the face of the ultimate shot-maker. It’s a style of play that produces plenty of errors—helped not a little by the heat and lightness of this year’s balls—and between them, the two men made 81 in the course of this two-hour match. Of more concern, for Federer was that his errors out-numbered his winners, 42-35—and he converted just three from a swathe of break points.

Those figures are thrown into sharp relief by the stats of Federer’s next opponent, in an even more eagerly anticipated match against the confident 20-year-old, Bernard Tomic. He came through his match against German qualifier Daniel Brands 6-7, 7-5, 7-6, 7-6, in just under three hours. And although he won one point less than his opponent, 153 to 154, he made 59 winners to 34 errors in the process.

It earned the burgeoning Australian, who is riding a crest of confidence from winning his first ATP title in Sydney, the chance to avenge his loss to Federer here in the fourth round last year.

This towering young man has never been short of talent or confidence, but since last year’s loss, repeated in Cincinnati, he has begun to channel that arrogance with some fine results.

Ahead of his latest match against Federer, scheduled for Saturday, he explained: “I had a few flaws in my game, and I improved that. I improved my serve a lot and my fitness. That’s why I think I’m playing good tennis on the court. Hopefully I can keep it up, especially next round.”

So Federer will not only have to start strongly and play aggressively, he will have to swing round that winner-to-error rate—and not allow 10 break point chances go begging.