Australian Open 2013: Can anyone halt Serena Williams’s majestic progress in Melboune this month? 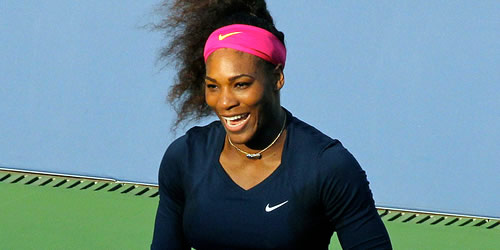 Serena Williams is currently ranked No3 in the world Photo: Marianne Bevis

With no fewer than 10 Grand Slam winners in the draw for this year’s Australian Open, one could be forgiven for thinking that the women’s field is wide open.

But of the 34 titles owned by those 10 champions, 22 were won by just two, and both are named Williams. Narrow it down still further, and almost half of them—15—belong to one woman: the mighty Serena.

Add into the mix that she has been runner-up in four more Slams, missed an entire year—three Slams—with injury and illness during 2010/11, and that she already has a record five Australian titles, and she is rightly many pundits’ favourite in Melbourne this year.

But there is another set of stats that provide an even more compelling case. None of those Grand Slam winners has beaten Williams since 2009 except Sam Stosur, who beat her in the US Open final of 2011. The only other winners of Majors last year, the top two Australia seeds Victoria Azarenka and Maria Sharapova, have each played Williams a dozen times and have recorded one and two wins respectively—Sharapova’s last one coming in 2004. And the other scheduled semi-finalist, Agnieszka Radwanska? Four matches, four losses.

Even that may count for nothing if Williams was undercooked, or showing poor form—but she is not. Apart from winning the last two Slams and the 2012 WTA Championships, she has just won the Brisbane title without losing a set—taking her winning run to 52 out of 54 matches.

But the other main protagonists are eying big targets in Melbourne. To start, any of the three top seeds could be No1 at the end of January.

Radwanska is seeking her first Major title, having reached her first final—taking a set from Williams—at Wimbledon: She already has two titles this year.

Na Li, one of those Grand Slam champions and runner-up here in 2011, has also started strongly with the Shenzhen title and a semi finish in Sydney.

Home favourite Stosur, ranked No9, is playing her 11th Australian Open but despite Grand Slam success in New York and a final in Paris, she still seeks success in Melbourne—her win-loss record is just 14 to 10. Her preparation this time has been discouraging, too: losses in the first round of both Brisbane and Sydney.

Then there is Caroline Wozniacki, top of the pile 12 months ago but now down to No10, and still without a Major to her name. Yet she was one of only two players to beat Williams last year, in Miami.

Which of them, if any, can halt Williams’s majestic progress?

In winning her first Grand Slam in Melbourne last year, Azarenka built an unbeaten 26-match, four-title run. She was denied in Madrid, at Wimbledon, the Olympics and the US Open by Williams and in Stuttgart, Beijing and the WTA Championships by Sharapova. The only other women to beat her, apart from retirement, were Marion Bartoli and Dominika Cibulkova, and both are in the bottom half of the draw—with Sharapova.

Azarenka’s potential seeds as far as the quarters, No31 Urszula Radwanska and No16 Roberta Vinci, should not pose a problem. Then things become more complex. She is scheduled to meet Sara Errani, but the Italian who made such progress last year is in a tricky segment with Wozniacki, who has a tough opener against Sabine Lisicki. The alternative is Anastasia Pavlyuchenkova, who reached the final in Brisbane, assuming Errani gets past the two-time Grand Slam winner, Svetlana Kuznetsova, who beat Wozniacki in Sydney.

Clearly Williams finds the Australian Open to her liking, having won it five times. With the last two Majors in her bag, she is also looking for another step towards a non-calendar Slam, which she first achieved a decade ago.

She, too, should be untroubled before the quarters, though Yanina Wickmayer just reached the finals in Auckland. But the bottom segment is more intriguing, not least because No8 seed, Petra Kvitova, has begun 2013 poorly, winning only one match in Brisbane and Sydney combined. If the temperatures soar, as promised, she may also suffer from the conditions.

Kvitova also has to contend with another Grand Slam winner—and Australian quarter-finalist in 2011—Francesca Schiavone in the first round, though the Italian has been on a slide, now ranked 44. Whoever wins through may well face Britain’s Laura Robson and, after her giant-killing antics at the US Open, she will fancy her chances if either Kvitova or Schiavone is below par.

Another teenager and No29 seed Sloane Stephens may also be a threat, rising as fast as Schiavone is dropping. She had a semi finish in Hobart and made the quarters in Brisbane. Others in this section include the rejuvenated Nadia Petrova as well as Lucie Safarova.

Radwanska is the only member of the top four who has not won a Grand Slam, but the ATP Fans’ Favourite is more ready than ever to put that right. Already with two straight titles and not a set dropped this season, she also looks injury free and confident. She is in a tough quarter, though.

The rising talent of Mona Barthel, a possible third-round meet, made the final of Hobart and the semis of Auckland. She, incidentally, is scheduled to face Briton Heather Watson in the second round.

Radwanska’s fourth match may be against former Grand Slam champion Ana Ivanovic or former No1 Jelena Jankovic, followed by one of two more Slam winners, Stosur or Li, in the quarters.

Sharapova had an outstanding 2012, but came unstuck in numerous finals against her fellow top-four. In last year’s Australian, it was a 6-3, 6-0 defeat by Azarenka, who also beat Sharapova in Indian Wells, Beijing and the US Open. Radwanska beat her in the Miami final, and Williams had the upper hand in Madrid, the Olympics (6-0, 6-1), and the WTA championships.

Sharapova avoids Williams and Azarenka until the final, with Radwanska her scheduled semi opponent—a good draw—though she lost to No5 Angelique Kerber indoors in Paris last year and the German is a possible quarter-final opponent.

Other problems may be posed by Venus Williams in the third round—she and Sharapova have shared the honours in their eight-year rivalry—and No15 seed Cibulkova in the fourth: The Slovak has beaten the Russian twice before and took out Kvitova, Errani and Kerber this week in Sydney. Cibulkova will first have to beat Klara Zakopalova, a finalist in Shenzhen.

But Sharapova’s biggest problem may be her body: She pulled out of Brisbane with a right collarbone injury in her only scheduled event so far this year.

Check out the men’s draw preview