Australian Open 2013: Heather Watson is beaten 6-1 6-3 by world No4 Agnieszka Radwanska in the third round in Melbourne 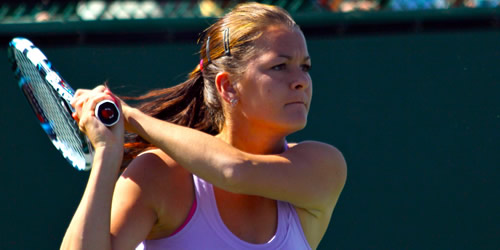 Heather Watson is breaking new ground all the time.

Since playing in her last Grand Slam—in New York five months ago—she has won her first ATP title, reached a new ranking high of 47, and reached the third round of this year’s Australian Open for the first time.

Her reward was a guaranteed purse only a little short of £50,000 plus a further rise in the rankings to around 41. And she is still only 20.

But for her to progress further in Melbourne, she had to beat a woman not dissimilar in size or in style of play to herself, world No4 Agnieszka Radwanska. The two women had something else in common: a popularity amongst both fellow players and fans. The sunny demeanour of Watson never fails to charm, while Radwanska has been the WTA Fans’ Favourite for the last two years.

So similarities there may be, but there are also differences. At Watson’s age, Radwanska was already hovering around the top 10. Last July, she reached a career-high No2 on the back of her first Grand Slam final at Wimbledon. She currently has 12 titles and came to Melbourne having already won two this year—a run of 11 matches without dropping a set. And she is still only 23 herself.

Watson, therefore, knew she had a fight on her hands when the two opened play on Melbourne Park’s second court on Day Five, all the more so because in their only previous meeting, at Wimbledon last year, she suffered a 6-0, 6-2 demolition. She admitted: “That killed me. I was so upset. I was playing at home in front of everyone and I just got wiped off the court.”

At 0-30 down on her opening serve, therefore, there was a worrying sense of dejà vu, but Watson fired in a couple of strong serves, an area she has worked on during the off season, and held with a sweet cross-court backhand winner.

Better still, Watson took her next service game to love, finishing with an ace, and not content with that, she earned two break points in the next game. Radwanska, though, used some smart wide serves and her pin-point forehand to force Watson out of position. She held.

That heralded a surge from the No4 seed, upping her pace and rhythm, and Radwanska rushed to a 40-0 lead on Watson’s serve. Some bold net-work saved a couple, but Radwanska continued to open up the court with angles and spin, finishing with a down-the-line winner. It was tactical artistry from the Pole to earn the break, and she backed it up with a smart, quick hold to lead 4-2.

Watson still tried to take the initiative at the net, but got burned with some sharp passing from Radwanska, and another winner down the line brought up more break points. The pressure produced a double fault from Watson and a 5-2 lead for the Pole.

So Watson changed her tactics and kept to the baseline, pinning Radwanska to the forehand wing with some penetrating cross-court hitting. It earned her two break points, and a rare backhand into the net from Radwanska gave Watson a glimmer of hope with a break back.

Watson went on the offensive again, serving big and rushing in for a smash. She did it again, which took her ahead of Radwanska in the winner count, but her third smash went astray and gave the Pole a break point. Now it was Radwanska who grabbed the net position, and with it the set, 6-3.

A gutsy Watson was not put off her game plan, though. She continued to go after the Radwanska serve, rushing the net and passing with some great angles if the Pole attempted to come in. Twice it gave the Briton break points but she pushed too hard. First she pounded a forehand wide, then she missed the court with a smash, and Radwanska produced a great forehand down the line to hold.

The opening point of the next game, a 26-stroke rally, showcased the speed and quick hands of both women, Radwanska coming off the best with a reactive volley that dropped just inside the baseline. Watson tried to apply some extra power, but Radwanska lobbed, dropped and passed her way to a break and a 2-0 lead.

That became 3-0, but everything then came to a grinding halt as yesterday’s heatwave transformed into rain. Both women could only wrap themselves in towels while the roof swung into action.

It was a moment that Americans must have watched with envy: Barely 10 minutes later, play had resumed on Hisense, just as it did on Rod Laver. The weather in Melbourne, changeable and often unbearable, is kept at bay with little trouble.

But Watson could not keep Radwanska at bay. The Pole, one of the best defenders on the women’s tour, repeatedly bided her time before slotting away a winner, and the gap opened to 4-0, then 5-0.

Watson produced one final burst, holding her serve with some more bold moves to the net, and she even came close to breaking Radwanska in the next game. But the crafty serving of the Polish woman fended off the attack and Radwanska took the set and match, 6-1.

Watson afterwards summed up her performance, and that of her opponent: “I thought I had a good start to the match. I had chances early on to break but I wasn’t able to convert, and I think after that…it kind of just slipped away a little bit.

“That’s what makes Radwanska so good. She’s always there every game, so you can’t have a second because she will just take the next few points. I feel like I did a lot better this time than last time…I felt like I was in it and it was a lot closer.”

What stood out, from both women, was their variety of shot-making, full of skill and daring: Watson took the net 21 times—though only won nine points—but Radwanska went forward 26 times, winning 14 points from the tactic.

Neither can generate enough power off the ground or with their serve to hit their opponents off the court, so timing, placement, variety, hand-speed and tactical smartness are their weapons.

Radwanska will have to deploy all those weapons against her next opponent, former French Open champion Ana Ivanovic, who beat fellow Serb Jelena Jankovic in a tough two sets.

Beyond that lies the possibility of another Grand Slam champion in the shape of Na Li, and further on still is the intimidating prospect of Maria Sharapova, who dropped just four games in a storming performance over Venus Williams.

But as Radwanska continues to prove, there is still more than one way to skin a cat of a tennis court.