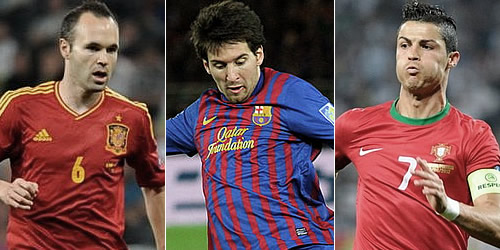 Lionel Messi is waiting to discover if he is to become the first man to land a fourth Ballon d’Or when the winner of the prestigious award is announced in Zurich on Monday evening.

Messi, who has won the prize for the last three years running, joins Real Madrid’s Cristiano Ronaldo and Barcelona team-mate Andres Iniesta on the 2012 shortlist.

The 25-year-old Argentina international finished the year with a staggering 91 goals to his name for club and country after breaking Gerd Mueller’s 40-year-old record of having netted the most strikes in a calendar year.

Mueller was full of praise for the diminutive Argentine after seeing Messi surpass his tally of 85 goals from 1972.

“My record stood for 40 years – 85 goals in 60 games – and now the best player in the world has broken it,” said Mueller. “I’m delighted for him. He is an incredible player. He’s such a nice and modest professional, and I hope he gets one or two more goals in 2012 and that he can then hold on to the record for the next 40 years.”

Manchester United boss Sir Alex Ferguson believes Ronaldo, who left Old Trafford in 2009, is up there with the best players ever to have lined up for the Red Devils and likened the 27-year-old to Eric Cantona.

“He’s an unbelievable player,” said Ferguson. “We have a pantheon of great players and Ronaldo definitely compares with any of them. Although he had a natural talent, he is in many ways manufactured himself – he practised and practised. He had a bit of the Eric Cantona about him in that way. He was definitely good value for Madrid.”

Iniesta also enjoyed a sparkling 2012, helping Spain retain their European championship crown and being named the player of the tournament in Poland and Ukraine. The 28-year-old midfielder also scooped Uefa’s Best Player in Europe award for the 2011-12 season after beating off competition from Messi and Ronaldo.

Manchester City and Spain midfielder David Silva believes the “magical” Iniesta deserves to win the award – which is voted for by journalists, national coaches and captains – ahead of Messi and Ronaldo.

He said: “The press often ask me about whether Messi or Ronaldo is the best, but for me something is very clear: Andres Iniesta is the number one. He is able to do even more difficult things on the pitch. He is magic with the ball and so influential.”

Meanwhile, Jose Mourinho, Pep Guardiola and Vicente del Bosque make up the shortlist for the Coach of the Year award.

All three managers led their teams to silverware in 2012, with Mourinho guiding Real Madrid to the La Liga title, Guardiola’s Barcelona lifting the Copa del Rey and Del Bosque overseeing Spain’s triumph at Euro 2012 in Poland and Ukraine.

Lionel Messi: “It’s nice to beat records but the win for the team is what is important. If Iniesta wins, it will be well-deserved for all that he has done, for the way he plays. Again, it will also be a prize for the dressing room.”

Cristiano Ronaldo: “If I win, perfect. If I don’t, never mind, life goes on. But obviously I’d love to win. I’m not going to lie or be hypocritical. Fair or unfair, the decision will be what it will be. I’ll maybe be very happy or maybe very sad. But that’s life. I can’t live according to an individual prize.”

Andres Iniesta: “The Ballon d’Or? This is something that I do not decide. The only thing that I am worried about is to play well and make the fans happy. I am not competing against anyone. I would give it to Messi.”

Stay close to The Sport Review for all of the latest news from the 2012 Ballon d’Or gala in Zurich on Monday 7 January.