Ballon d'Or 2012: Lionel Messi beats off competition from Cristiano Ronaldo to scoop the award for a record fourth time

Lionel Messi has beaten off competition from Cristiano Ronaldo and Andres Iniesta to become the first player to win a fourth Ballon d’Or award.

The 25-year-old Barcelona star finished the year with a staggering 91 goals to his name for club and country after breaking Gerd Mueller’s 40-year-old record of having netted the most strikes in a calendar year.

The Argentina international received 41.6 per cent of the vote, ahead of second-place Ronaldo (23.68 per cent) and Messi’s Barça team-mate Iniesta (10.91 per cent).

“To tell you the truth, it’s really unbelievable to get a fourth consecutive award,” said a beaming Messi upon receiving the prize. “I would like to recognise my colleagues from Barcelona and Argentina.

“I would like to thank my family, my friends and finally my wife and my son. They are the most beautiful thing I ever got from God.”

Meanwhile, Spain boss Vicente del Bosque was named as Men’s Coach of the Year ahead of Pep Guardiola and Jose Mourinho.

Del Bosque’s Spain side became the first team to retain the European championship crown with their success in Poland and Ukraine last summer.

“It is an honour for me to represent Spanish football here today,” he said. “I would like to thank all the players of the Spanish team. They have an outstanding behaviour. It’s a privilege to work with them.

“I would like to remember all of the coaches that I had in my career who influenced my desire to become a coach.”

“I have received quite a number of awards over the decades, but to get the Fifa Presidential award, that is unique,” he said. “For this reason, I would like to thank the president for keeping me in mind for this award.”

Elsewhere, Abby Wambach won the Women’s Player of the Year award, while former USA boss Pia Sundhage was named as Women’s Coach of the Year. 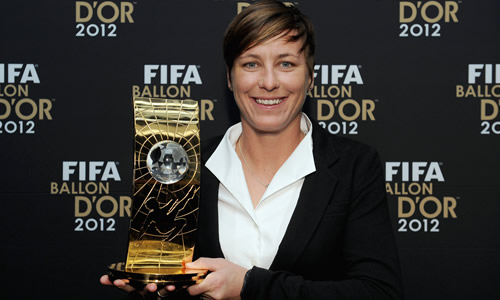 Abby Wambach won the Women’s Player of the Year award ahead of Marta and Alex Morgan (Photo: FIFA/Getty Images)

“They told me to prepare a speech but I really didn’t expect this,” said Wambach. “Winning any individual award is the total product of the team that you play for. This is for all of my team-mates and all of the fans out there who continue to inspire me and my team.”