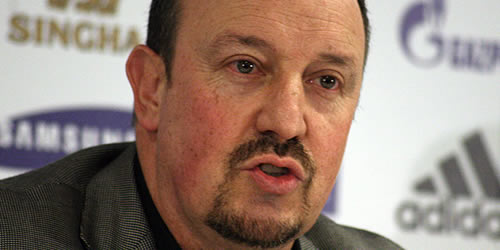 Rafael Benítez has accused Marco Materazzi of “crossing the line” with his recent comments about the Chelsea boss’ management style.

Materazzi played under Benítez at Inter in 2010 and was quoted as calling him “weak” in an interview by France Football this week.

“It’s just to clarify that what he said is not true. It’s a lie, it’s very simply to see.”

Materazzi added: “At Inter’s training centre, there were photos on the wall of all the most successful past coaches. Benítez had the ones of Jose Mourinho taken down. With that gesture, he showed his character; that of a weak person.”

Benítez, whose reign at Inter lasted just six-and-a-half months, responded: “The other one about the pictures…I didn’t know about where this locker room was to take the pictures off. It’s a lie. Everybody knows that it’s a lie. But still he’s repeating these lies.

“When you talk with a liar, you have to say that he’s a liar.”

The Spaniard added: “I wanted to be professional and respect people because I was talking with members of his family and they were telling me, ‘you need to understand him’.

“So I tried to be nice, tried to be professional and as a person I wanted to respect him – but I think he’s crossing the line now.

“I will not talk too much about him because everybody knows him [in Italy].

“He cannot discredit me because everybody knows him. Forget about him, believe me.”

Rafael Benítez: Start to my Chelsea reign has been full of positives