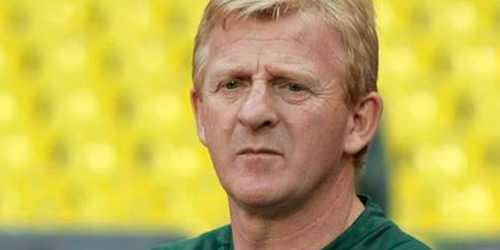 Gordon Strachan will take charge through to Euro 2016 Photo: Soccer.ru, via Wikimedia

Gordon Strachan has admitted his pride at being appointed as Scotland’s new manager.

The 55-year-old, who was capped 50 times, has signed a contract which will see the former Celtic boss take charge for the remainder of the World Cup qualifying campaign and Euro 2016 qualifiers.

Strachan replaces Craig Leivein, who was sacked in November with Scotland lying in bottom in World Cup qualifying Group A.

“The time is right for me to be able to take a job like this,” he said after his appointment was announced.

“There’ll be rough times but I hope there’ll be good times too.

“Every club you go to there’s always challenges but this is the first time the challenges are in front of a nation.

“If you can be successful you can make a nation happy and make a nation proud and that is the priority for me to be able to do that with help from other people.

• An energetic and talented midfielder who was capped 50 times by Scotland and helped Aberdeen to win the Cup Winners’ Cup under Sir Alex Ferguson, Gordon Strachan began in management while still a player at English top-flight club Coventry City in November 1996.

• He helped Coventry avoid relegation and then ended his on-field career aged 40 to concentrate on coaching, keeping the club in the Premiership until 2001. Strachan was sacked early in the following season but was swiftly appointed at Southampton – who he again kept in the top division against the odds.

• In 2002-03 he took them to eighth place in the Premier League and the FA Cup final, losing 1-0 to Arsenal but earning a Uefa Cup berth. Strachan announced early the next season that he would step down at the end of the campaign for personal reasons and left his role in March 2004 to concentrate on media work.

• Always a man in demand due to his tactical astuteness and motivational skills, in summer 2005 Strachan was given the tough task of succeeding Martin O’Neill at Celtic.

• He also spent a year in charge of Middlesbrough