After an interview full of half-truths, Matt Cansick asks whether any value can be placed on the disgraced cyclist's testimony 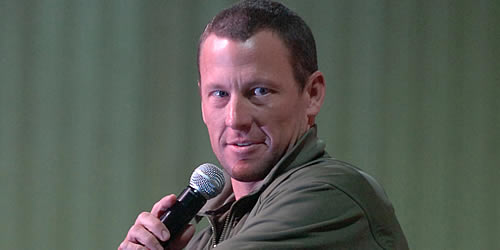 With a simple “yes”, the façade came tumbling down. One of the most famous names in sport instantly became infamous, and from now on, the name of Lance Armstrong will forever be associated with serial lying and cheating.

It was far from the ideal confession, especially for the sport of cycling. Much of this disappointment lies in the fact that the interview was pre-recorded and conducted by former talk show host Oprah Winfrey, rather than carried out in a court of law.

The answers, no doubt rehearsed with his team of highly-paid lawyers – whose fees will now start to look a lot less palatable – were carefully crafted so as to pre-empt the sceptics. Several times he tried to back up his denials with how he knew he was not the “most believable guy in the world” and how he wasn’t sure if he was giving “an acceptable answer”.

The continued denials of several charges against him were surely a deliberate tactic. An absolute admission of guilt on all counts would remove all future credibility. Casting doubt on the occasional accusation will make him vaguely believable in the minds of some.

Why would he lie about that when he’s owning up to everything else? That will be the argument. The answer: mainly because he still has other people to protect as well as himself.

One of these people is the doctor with whom he had continued contact during his career. When his name was brought up, he responded, “I viewed Dr Michele Ferrari as a good man and still do.” There are two things to consider from this statement.

Firstly, this assumes we are willing to accept Armstrong as a good judge of character. More importantly, it proves that we cannot believe his assertion that he loves cycling and wants to help with the clean up. He is more concerned with maintaining the omertà that exists between him and those who helped him the most.

This includes those who were with him in the Indiana hospital room in 1996, and the resulting avoidance of the topic – “I’m not going to take that on” – was one of the worst moments of the interview. Despite all he has put former team-mate Frankie Andreu and his wife Betsy through, he still couldn’t bring himself to give them their credibility back.

He did agree that David Walsh, the Sunday Times journalist who has pursued him for so long, deserved an apology, and former US Postal soigneur Emma O’Reilly was afforded an apology of sorts. He claims he could not remember whether he sued her or not.

Armstrong stuck to his guns on the accusations of failed tests and pay-offs, and there will be a lot of people who breathed a collective sigh of relief. In fact, the UCI – and former President Hein Verbruggen in particular – came out of this more or less unscathed.

Verbruggen’s successor, Pat McQuaid, said in his statement that Armstrong “confirmed there was no collusion or conspiracy” between the disgraced rider and the sport’s governing body. Even if the rest of us won’t give him the time of day, it appears the UCI are willing to take him at his word.

The more significant denial for the UCI was when Armstrong asserted that he did not dope during his comeback between 2009-11. Wada’s eight-year statute of limitations most likely influenced the thinking behind this response.

Going back to the Usada report, the plasma volume in his blood during the 2009 Tour de France was seen to have dropped to pre-race levels, when “during prolonged periods of strenuous exercise…it is well documented that the percentage of plasma in an athlete’s blood increases and consequently the concentration of red blood cells decreases”.

Yet still he denies doping after 2005, even when the report also states that the likelihood of anomalies in his samples from the 2009 and 2010 Tours de France occurring naturally are “less than one in a million”.

In light of this, the fundamental question remains: should Armstrong be sworn in again, how much of our sullied faith can be put in what comes out of his mouth?

He clearly does not have an issue with lying under oath. Anyone who has watched his 2005 deposition, in relation to bonuses received from SCA Promotions, can see that this was not a man sweating under the lights, or shifting uncomfortably in his seat.

SCA has now confirmed that it intends to file a $12m lawsuit and others are likely follow, so, depending on Armstrong’s intentions when it comes to paying back those he has defrauded, it may not be long before is called upon to testify.

Until then, doubts will remain over the questions he failed to answer, those he answered unconvincingly, and where he goes from here. Many will not care about his next move, but it is important; he has said that he will be the “first man through the door” in a truth and reconciliation commission, and there is still vital information pertinent to cleaning up the sport of cycling that he is yet to disclose.

The moment that left the sourest taste in the mouth was his sordid description of his ban as a “death penalty”. From someone who claims to have been humbled most by his removal as chairman from the cancer charity that he created, and has survived the disease against all odds, it is an unforgivable analogy.

It has been an uncomfortable, unsavoury and, for want of a better word, doctored process. The casual setting; the yellow Livestrong bracelet flicking into view; the image of flicking through a dictionary to find a definition of “cheat”; all examples of Armstrong trying to maintain control of the situation.

How appropriate he mentioned that “wolves” had been pursuing him. Most who still believed stopped running to his side after seeing Usada’s reasoned decision, and now any that remained will have turned their backs as well.

No other doper made such a concerted effort to take the fight to those who sought to bring him down. He deserves every lawsuit that now comes his way.