Messi lines up alongside Ronaldo in 2012 European dream team

Lionel Messi and Cristiano Ronaldo line up in the 2012 Uefa.com users' dream team as Premier League stars are snubbed again 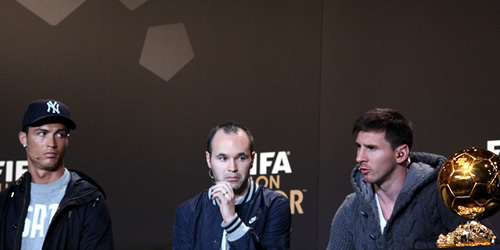 Cristiano Ronaldo and Lionel Messi are both in the Uefa.com 2012 team of the year

Lionel Messi and Cristiano Ronaldo have both been named in the Uefa.com users’ team of the year for 2012 as Spain-based talent dominated the list.

There are no Premier League representatives in the 11-man side, with eight of the players featured plying their trade for either Barcelona or Real Madrid.

It is the second time this month that players from the English top flight have been ignored in a dream team after no Premier League footballers were included in the FIFPro World XI at the Ballon d’Or gala.

Four-time Ballon d’Or winner Messi lines up alongside rival Ronaldo in the European team, which was compiled after 5.3 million users had their say on Uefa.com.

Thiago Silva, Philipp Lahm and Andrea Pirlo are the only three players included who do not ply their trade at a Spanish club.

Ronaldo makes a record seventh appearance in the line-up along with Real Madrid team-mate Casillas, who makes the cut for the sixth year running.

Tottenham’s Gareth Bale was the sole Premier League representative in the 2011 edition, while Chelsea’s left-back Ashley Cole flew the English flag in 2010.