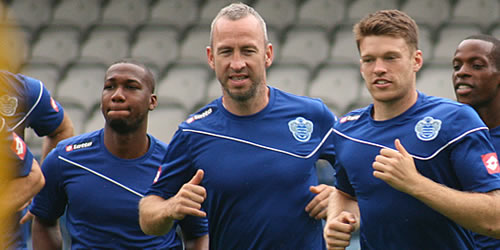 Shaun Derry has signed a one-year contract extension at Queens Park Rangers to keep the midfielder at Loftus Road until the summer of 2014.

The 35-year-old was out of favour under former Hoops manager Mark Hughes after the arrivals of Esteban Granero and Park Ji-Sung edged him down the pecking order.

But Derry has been reinstated into the QPR starting line-up under Harry Redknapp as the new manager bids to add more steel to his midfield.

The midfielder has started QPR’s last three Premier League games as the west London side secured a famous victory over Chelsea, followed by successive draws against Tottenham Hotspur and West Ham.

“There’s a togetherness about us now. The team spirit – which comes through runs like this – is improving all the time.

“We’re all coming together at the moment. We’re showing that togetherness that is required.”

Derry has made 91 appearances for QPR after completing a free transfer to Loftus Road from Crystal Palace in 2010, scoring his first league goal for the club in a 3-2 win against Liverpool earlier this year.

And the veteran has set a target of making a century of appearances for the Hoops before his new deal expires in 2014.

“I’m determined to hit that landmark figure. That will be a fantastic achievement,” he added.

“People who have followed me throughout my career will notice that I’ve moved on every two or three years, but when you hit that 100 game mark it’s a fantastic milestone.”