The world of international squash, the sport with an eye on Olympic glamour, is a revelation, writes Marianne Bevis 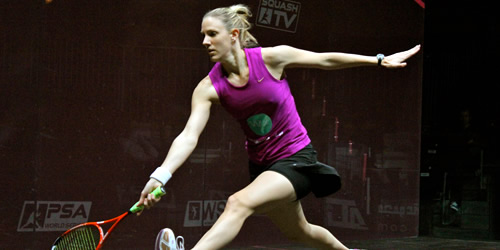 For the multitude of squash fans used to playing within the confines of four greying walls—chilly in winter, sweltering in summer, tiny dents in the worn surfaces sending their green missile into an entirely unplanned trajectory—the world of international squash, the sport with an eye on Olympic glamour, is a revelation.

It is the court that first hits you between the eyes—dropped, like something NASA might have designed, into a bubble amid the velveteen green lawns of the Victorian Queen’s Club. Hi-tech meets High Street Ken.

This is the Z-court, used only at the World Series Squash Finals. Its special one-way-vision glass ensures the speed of this most dynamic, 3-D, high-speed sport can be captured not only by spectators but, more importantly, by TV—and through 360 degrees.

It is as cheese to the chalk-like courts of old. The arena that encloses its gladiatorial combatants is deep maroon, the lines shocking pink, the floor a deep grey-washed wood worthy of a Scandinavian show home.

Then there is the disconcerting 30cm strip above the tin through which photographers are just visible, their images intermingling with the two figures who sprint within the shiny, reflecting cube. Add in one more shadowy layer, of the audience faintly reflected in the back wall, and the court transmutes into a magic box.

There are a few reassuring touches that make this version of squash familiar to the recreational player: These highly-tuned athletes still wipe sweaty palms on the glass walls; they still spin their rackets to decide on the server; and amid all the hi-tech paraphernalia, there is still the pragmatic, everyday solution to sweat on the floor—a mop.

No surprise, though, that it was innovation and modernity that formed the thrust of the World Squash Federation’s presentation to the International Olympic Committee’s Programme Commission before Christmas.

Squash, which failed to make the cut for Olympic selection in Rio 2016, has been making strenuous efforts to ensure 2020 is a different story and, as the WSF President, N Ramachandran explained:

“Our presentation set out to show that squash has been on a journey of innovation over recent years. Developments such as state-of-art glass courts, under-floor lighting, referee video review, side court entrances, and improved in-venue presentation have all led to a dramatic change in the broadcast and fan experience.

“We also stressed the global reach and appeal of the sport. All five continents have produced both male and female world champions, and the current women’s top 20 features players from 12 countries spread across every continent. There can be no doubt that if squash were to be included in the Olympic Games programme, it would provide more countries with a chance to be on the medal podium.”

The WSF went on to unveil its Squash 2020 film, which features two of the game’s most high-profile players, current World Champions Nicol David and Ramy Ashour.

Ramachandran was joined at the IOC presentation by the man who held the No1 ranking for most of 2012, Briton James Willstrop, who added:

“Squash represents the essence of Olympic sport. It’s gladiatorial—given that we are the only racket sport where players share the same space—and to excel requires a mix of mental strategy, skill, athleticism and fitness. In the past few seasons there has been a revolution in the way squash is presented to spectators. MCs, music and lighting have really helped to get the fans involved and that’s great for players.

“I’m 29 years old so my dream to compete in the Olympic Games may never be realised, but if I can play a part in helping squash become part of the Olympic programme, I could retire a happy man.”

Before retirement features in Willstrop’s career, though, he is hoping to advance beyond he semis of the World Series Finals for the first time, and he made a good start by beating Egypt’s Karim Darwish in his opening pool match. However, he lost his second match, a thriller against Greg Gaultier.

“When you’re No1 in the world and you have losses I think you want to prove yourself a bit. This is a big event for me,” Willstrop said after his match. But this event is clearly big for everyone in squash.

It is showing fans, old and new alike, just how far their sport has come in drawing a bigger audience, attracting commercial broadcasters and impressing those hard-to-impress Olympics representatives.

So while most of us continue to pound our small green ball at those greying walls each weekend, we can also be optimistic about the chances of the modern game thrilling millions more in 2020.

British results after two round of three round robin matches: