World Series Squash Finals: The best men and women from squash’s elite World Series are in action in London this week 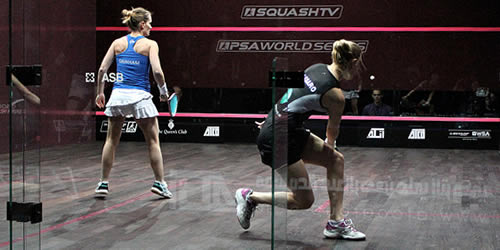 The best men and women from squash’s elite World Series events are in London this week to compete for one of the sport’s most prestigious trophies and a share of a $100,000 purse.

The 16 players are competing in the squash equivalent of tennis’s World Tour Finals, the ATCO PSA World Series Squash Finals, which is being hosted, for the fourth consecutive year, at London’s home of racket sports, the Queen’s Club.

With world champion and world No1 Ramy Ashour forced to pull out at the last minute with injury, the men’s field is headed by world No2 Nick Matthew, one of five British men and women in the competition.

Other home talent comes in the form of No3 James Willstrop, who conceded the No1 ranking to Ashour after the final event of 2012 in Doha, No7 Peter Barker, the top-ranked British woman at No3, Laura Massaro, and former No2 and last month’s No6, Jenny Duncalf.

The women’s field is headed by one the superstars of racket sports, the elegant and petite Malaysian, Nicol David. She has won no fewer than seven world championships, most recently the 2012 title last month in the Cayman Islands where she beat both British women—Duncalf in the semis and Massaro in the final. David is also defending WSA World Series Champion and, with a clean sweep of the World Series bar one tournament, she is the one to beat again in London.

She began in imperious style in the opening phase of the women’s tournament—the women’s round-robins headline the afternoon sessions this week on the state-of-the-art glass Z-court at Queen’s—taking out No8 Annie Au, 11-7, 11-4.

Duncalf, who admitted to a sickness bug over the New Year, bounced back from a dropped first game, in which she held three games points before losing 12-10, to take the next two in these best-of-three-game openers, 11-8, 11-8. Perhaps her opponent, Raneem El Weleily, had cause to be distracted: It was revealed that she had just this week got engaged.

The final match in Round 1 featured the young sensation from Egypt, world junior champion Nour El Sherbini who, at 17, became the youngest ever finalist of the British Open. Now 18, she is at a career high No6 in the senior rankings, but succumbed to the lower-ranked Frenchwoman, Camille Serme.

Despite some long and intricate shot-making, Sherbini could not get an edge over her nimble opponent and lost, 9-11, 10-12. Again, a post-match revelation may have offered a clue to Serme’s success: “I loved the pink court”—and she was, indeed, wearing bright pink too!

The men’s pools get under during the evening sessions, with Matthew and Barker opening the action in an all-Brit encounter.

Check out schedules of play up to and including the finals on Sunday, commencing 4pm.

And check out some photos of the opening session.