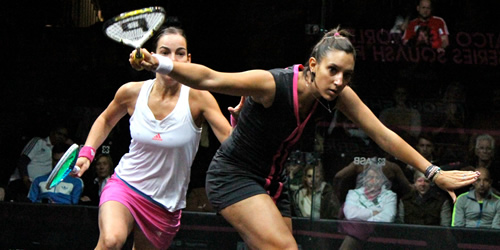 The two women who provided perhaps the highlight of the women’s second round, world No1 Nicol David and No3 Laura Massaro, entered their final round-robin matches with very contrasting targets.

Massaro, with two straight-sets wins under her belt already—the second of them only her third victory in 17 matches against David—knew already that she was into the semi-finals when she took to court against Hong Kong’s Annie Au.

But after her scintillating performance to beat David, Massaro found herself outplayed for much of the first game as Au’s left-handed variety created one low, angled winner after another and the Briton could not close the early gap, losing the opener, 11-5.

Massaro had more success in the second but fell victim to more smart play from the smaller woman in the third decider and admitted that her rare position—knowing she did not have to win—may have affected her game:

“I wasn’t really good enough today… a bit of a disappointment after my good win yesterday.”

The seven-time world champion, David, who had beaten Massaro in the world final last month, was altogether more upbeat after her outstanding win over long-time rival, Natalie Grinham.

David’s game sparkled almost as much as her golden shoes, her trademark speed and fluidity taking her to a quick 10-2 lead as she mixed up her direction and pace of shot like a magician. She closed out the game, 11-4 and, although the second game was closer, she preserved a three-point lead for most of it, despite some neat drop-shots from Grinham in the early stages.

The incentive for David, of course, was that she needed the win to ensure her semi-final place. She had promised, after her loss to Massaro, that she would “go back and reassess for the next match…You just have to be sharp straight away in this [best-of-three] format.” She was true to her word, and continues her campaign to defend her title at Queen’s Club this weekend.

That meant three places in the women’s tournament were decided before the last round-robin match got underway: Frenchwoman Camille Serme had secured her place with two wins in the first two rounds. Meanwhile world No2, Raneem El Weleily, was already out of contention.

The final spot, then, came down to Duncalf’s match against Egyptian Nour El Sherbini: Each came to their decider with one win and one loss in the tournament. The two women had only played one another three times, and El Sherbini had a one-match advantage. For Duncalf though, falling at this stage would be a blow, having joined compatriot Massaro in the semis at the first playing of the tournament in 2012.

It became a contest appropriate to the stakes as the Egyptian woman lived up to her reputation as one of the new stars in squash. In 2009, she created history as the youngest ever junior world champion—at just 13—and after four years on the senior tour, she rocketed 208 places to reach a high of No6 last October, aged 17.

She played the 30-year-old Duncalf with extraordinary maturity and the two edged, with no more than a point between them, to 10-10. Their level of play increased with each shot, long rallies pushing both to make winners and force lets. Now Duncalf served for the game, now El Sherbini.

At 15-16, a drop-shot winner from one was followed by the same from her opponent. But in the end, it was superb defensive shotmaking from Duncalf that took the decisive point with two boasts off the back wall: She took the game, 18-16, in 21 minutes. Some matches in the tournament had taken less time.

The teenager, though, regrouped and ripped through the second game with some great tactical play—a sign of what this youngster brings to the game—and she levelled, 11-4, in just six minutes.

It came down to the last game and that, like the first, was level almost from start to finish. The Egyptian took a 3-0 lead, Duncalf drew level and they alternated points to 9-9. What made the conclusion so gripping was the variety and the winner-count.

There were drop winners, down-the-line winners and overhead smash winners. The first error, a hit on the tin, came from El Sherbini and it gave Duncalf match point. The experience of the Briton seized the advantage, an 11-9 win, and a place in the semis.

El Sherbini was gracious—“she deserved to win”—though suddenly looking the teenager she is: “It’s my first time here. I hope next time I can do better.”

It is Duncalf, though, who takes her place alongside compatriot Massaro, golden girl David and first-time semi-finalist, Serme. It promises to be a great finish.