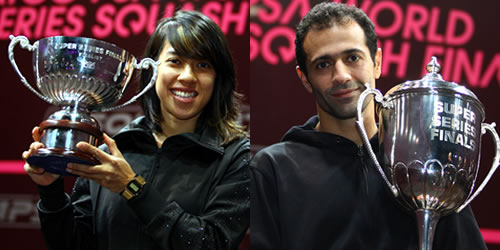 If the knowledgeable crowds who have packed London’s Queen’s Club on these grey, early days of 2013 could have chosen the ultimate line-up to showcase their sport of squash, they may well have come up with the four players who contested the titles at the World Series Squash Finals.

On the women’s side was the undisputed queen of squash, seven-time world champion, Nicol David—fluid and elegant in movement, crisp and efficient in execution, and top of women’s rankings since August 2006.

On the men’s side was the four-time world champion, Amr Shabana, a man able to pick extravagant winners from thin air while holding his audience in the palm of his hand: Ranked No1 for 33 months, 2006-9, and now with nine straight years in the top 10.

Both David and Shabana brought experience, charm and world-beating credentials, both were defending champions—and both faced top-ranked British opponents. 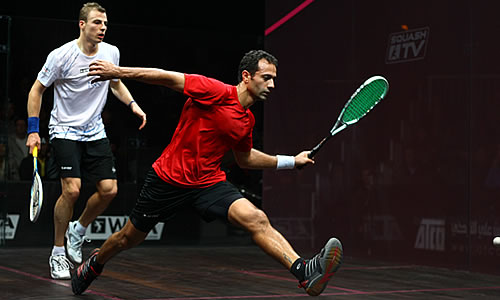 The tall, athletic Laura Massaro is world No3 and was the only woman in the tournament to score a win over top-seed David—in straight sets. These two, both 29, were also the last women standing at 2012’s climax, the World Open.

David won that contest in three straight sets—and the final in London would revert to the same best-of-five format after showcasing the fast-and-furious best-of-three format during the rest of the tournament. And perhaps, after five straight days of competition, and Massaro’s intensive 45-minute semi-final against compatriot Jenny Duncalf, that could prove decisive.

Shabana faced World No2, Nick Matthew, himself a two-time world champion—conceding his title just a month ago—and world No1 for the whole of 2011.

The two 30+ stars first met more than a decade ago and their head-to-head suggested this would be a battle royal. Matthew held the 12-10 advantage but Shabana had come out on top in all four of their previous encounters in the World Series Finals—including his straight-sets victory in the round robins this week.

But their semis had both been long and tough: Shabana took 69 minutes to beat Briton James Willstrop while Matthew took 65 to overcome Frenchman Gregory Gaultier. As Shabana said, “Nick is one of the fittest guys out there and he covers the court very well. I’ll have to play well against him.”

It was the women who first took to the hi-tech, cerise-and-black Z-court, and David threw down the gauntlet with a vengeance, darting to and from the T to fire off volley winners, cross-court drops and retrieve with apparent ease. It took just 7 minutes to seal the first game 11-3, and only a minute more to do the same in the second, 11-2.

Massaro fell foul of the Malaysian woman’s super-fast movement and astute placement but showed far greater resistance in the third game. The British woman’s three-wall boast began to reap a few points and a valuable three-point margin, 4-7. She looked more aggressive, playing closer to the front of the court, but such is David’s defensive skill that the Malaysian managed to pull her opponent back to 8-8. Suddenly, with a great short boast, she earned two match points. Massaro saved one but could not retrieve a final winner from the her remarkable opponent.

It had taken a total of 31 minutes, but David generously credited her opponent:

“It didn’t feel like straight games, it was such a good match. Knowing she had the home crowd, I knew I had to start strong…”

She had, in truth, stayed strong throughout. She may be 29, and the 2020 Olympics may be more than seven years away, but if anyone can still make an impression at 36, surely it is David. 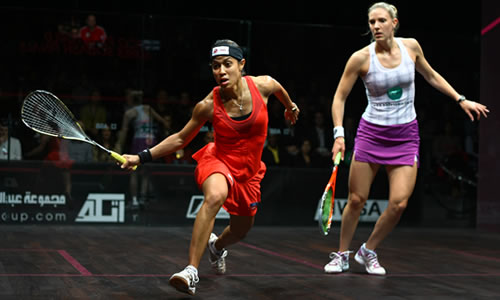 Next it was the top male Briton’s chance for glory, and he began with great energy and aggression, storming to an early lead that opened to 9-3 with a flurry of short forehand winners. In contrast, Shabana looked a little lack-lustre and the first game went to Matthew in nine minutes, 11-4.

The Egyptian quickly regrouped, and returned to court with a magic wand in place of his racket. With renewed energy, he took the second game, 11-2, also in 9 minutes, courtesy of some superb drop shots, boasts, flicks and disturbing disguise. And the third game brought more of the same, with the mid-section bringing out more dying winners at the front of the court, and terrific accuracy down both walls. Eleven minutes, and Shabana took the third game, 11-4.

Matthew is not called ‘the wolf’ for nothing, nor has he been world champion and world No1 for nothing. He remained aggressive, drew on his renowned energy supplies, and took a marginal lead in the fourth game, 5-3. But he could neither pin down his opponent, nor run him into the court. This was a fitter, leaner Shabana than the tour has seen in a while, and his focus was also admirable.

He afterwards paid tribute to his wife and his new baby son, perhaps some inspiration for his comeback at Matthew, first by a point’s lead, then by two, and finally earning three match points with a flicked backhand winner. The game, match and title were Shabana’s, after 45 minutes of thrilling squash, 11-7.

Matthew admitted that his opponent had been simply too good: “He would have been too good for almost any player…He was a steam train.”

And so “Team GB” came away with two runners-up trophies, but safe in the knowledge that they were beaten by two of the finest athletes in sport. If this day’s performances cannot convince the International Olympic Committee of squash’s rightful place at 2020, nothing will.

Footnote: Just hours before Matthew and Massaro played in London, British teenager Emily Whitlock lifted her second British Junior Open title in three years in Sheffield. She added the under-19 British Open to her under-17 success in 2011 and the European Championship Medal she won in Portugal last April. Whitlock beat Egypt’s Nouran Gohar 11/8, 9/11, 11/4, 11/7.