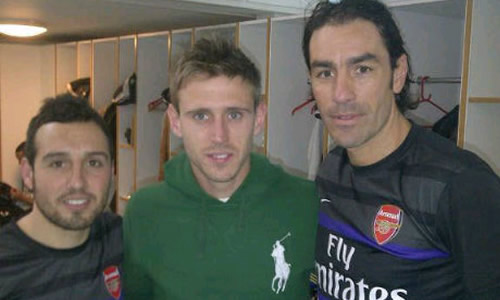 Arsene Wenger says Nacho Monreal has “passed” the Premier League test after the defender’s promising start to his Arsenal career.

The left-back was handed a tough initiation, with back-to-back games against notoriously tricky English top-flight sides Stoke City and Sunderland.

However, Monreal played a key role in successive clean sheets after arriving from Malaga in a £8.3m deal in the January transfer window.

“There is no better culture shock than to play against Stoke and Sunderland,” Wenger said.

“He has not said a word to me about it, but he has spoken with the other players and he has seen all about the passion and commitment of the English game.

“You can say Nacho Monreal passed that test.”

With Monreal already excelling in defence, Wenger is also confident Arsenal that supporters will get to see the Spaniard’s attacking qualities as he grows into the Premier League.

“The first thing you want from your defenders is to defend well, so we cannot reproach him for that,” Wenger added.

“You will see the other aspects of his game more when his confidence has settled.

“Monreal is good in the air for a guy of his size, has a quick leap and has looked good. He is very strong in other areas too, his crosses for example, and his forward play you will see a bit later.

“It happened with Kieran Gibbs too, the more confident he became the more efficient he was going forward. It can take a bit of time to express that side.”