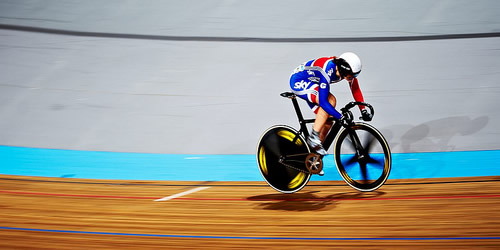 Becky James brought the curtain down on a record-breaking World Track Cycling Championships as she stormed to her second title in two days in Minsk, Belarus.

Heading into the final day of competition James could already call herself a world champion having won sprint gold less than 24 hours earlier.

But the 21-year-old was not done there as she returned to the track to lead the keirin final from start to finish to double her gold-medal tally.

James also heads back home with bronze from the time trial and team sprint, which she claimed alongside Victoria Williamson, meaning she becomes the first British rider to claim four medals at a single World Championships.

“Oh my gosh. I can’t believe it. Wow,” said James, who held off the challenge of China’s Jinjie Gong and Cuban Lisandra Guerra Rodriguez to win the keirin title.

“It’s going to take a good week for it to sink in, or two weeks, or a month.

“I just need someone to pinch me and tell me if it’s really happening to me. I feel like it’s a complete dream apart from the pain in my legs.”

Meanwhile, Olympic omnium champion Laura Trott had to settle for silver as she surrendered her world title to American Sarah Hammer.

The 20-year-old helped Great Britain win team pursuit gold on Thursday but her tenth-place finish in Saturday’s points race ultimately proved crucial as despite bettering Hammer twice on the final day she still came away with silver.

Trott said: “A better rider beat me on the day. What more can I do?

“After the points race, I am happy to come away with a medal, so to end up with silver I am super happy.”

Despite having no more finalists on the final day Britain’s young team still ended the week on top of the medal table in Minsk, with nine in total, including five golds.