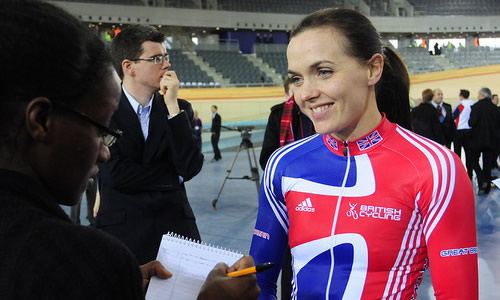 British Cycling head coach Shane Sutton insists it is too early to compare Becky James with Victoria Pendleton despite the Welshwoman’s achievements at the Track World Championships.

James became the first Brit to win four medals at a World Championships last weekend after taking gold in the keirin and individual sprint and bronze in the 500m time trial and team sprint in Minsk.

The 21-year-old’s win in the sprint followed on from Pendleton’s victory in the same event at last year’s World Championships, the last ever world title the double Olympic champion secured.

However, the best medal haul Pendleton, who won sprint gold at the Beijing 2008 Olympics and the keirin title at London 2012, managed at a single World Championships was three.

She did that on three different occasions in between 2007 and 2009 winning 16 medals in total throughout her career with James opening her World Championship collection in Minsk.

But Sutton, who was overseeing the British team with Sir Dave Brailsford sitting out, insists it will take a number of years yet before James and Pendleton can be matched up against each other.

“This girl, compared to all of them, she’s probably got a little bit more tactical nous,” said Sutton.

“She’s probably got a steeliness more than them.

“She probably hasn’t got the raw speed yet that Vicky had. Vicky, in her top flight, was incredible. Vicky was born with it.

“She had a gift; she could pedal at a great cadence. You can’t compare the two. Maybe in six years’ time. Vicky goes down in my book as one of the legends of the women’s sprint.”