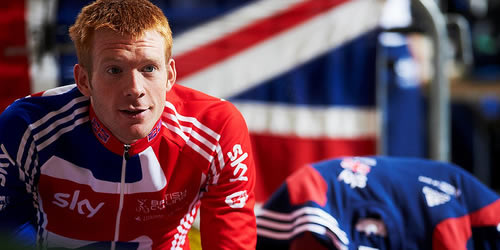 Ed Clancy admitted he struggled for motivation in the heady days after last year’s London 2012 Olympics but insists he is back in the groove for this week’s track cycling World Championships.

Clancy – who won gold in the team pursuit last summer – was part of the three-man team sprint at November’s UCI World Cup in Glasgow.

But he has returned to the pursuit squad for this week’s event in Minsk – the major objective for the 2013 season.

And Clancy admits he has no regrets about the decision to experiment.

“I really didn’t know what to expect because I still look and feel like an endurance rider, I was never sure how it was going to work out,” he said.

“It was just a side project really, I spent years talking about sprinting and I really enjoyed being part of the programme.

“If I had gone straight back into the team pursuit after the Olympics it would have been like groundhog day – here we go again same old, same old.

“It would have been fine but a change is as good as a rest and it was good to do something a bit new and exciting and enjoy some challenging sessions.

“I’m not complaining though. I love what I do, perhaps it is the fear of getting a real job!”

Clancy, 27, admits the first year after an Olympics is always the toughest – which is usually reflected in the results at that year’s track cycling World Championships.

Great Britain won seven out of ten track golds at the 2008 Beijing Games but only two at the 2009 World Championships in Pruszków.

Come London 2012 and they won seven golds in ten events again – a repeat of their record in Beijing, despite changes to the regulations which limited the number of competitors they could enter.

“I was on a bit of a downer for two years after Beijing. I thought things would just keep getting better and better but I was naive and too unrealistic,” he adds.

“The World Championships are the first stepping stone on the road to Rio, that is where our focus is now and success there is the ultimate goal.”