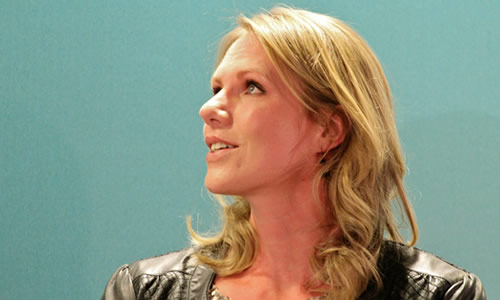 Esther Vergeer ends her career without having suffered a defeat

The end, when it came, had a certain matter-of-fact brevity.

The most successful champion and one of the most admired individuals in sport tweeted: “Very special day: officially stopped tennis, and the launch of my book.”

The person in question is Esther Vergeer, described by former Wimbledon champion and director of Rotterdam’s ABN AMRO tournament, Richard Krajicek, as “perhaps the most successful athlete of all time.”

The career in question had just celebrated 10 years of unbroken success, 470 matches without defeat.

The record in question may never be equalled: ITF Wheelchair World Champion for the last 13 years; 148 singles and 136 doubles titles; 44 Grand Slam titles; seven Paralympic gold medals; world No1 since 1999—until, that is, she decided not to defend the World Masters title that she had held for 14 years.

The alarm bells amongst her many fans and admirers may have begun to ring when she explained that first absence: “London is only six, seven weeks behind me… but I have not felt the need to go play tennis.

“And I’m perhaps the most surprised. I think it’s not fair to myself, my opponents and the tournament organisations to play.”

But no-one, even Vergeer herself, anticipated that her latest Paralympic gold at London 2012 would be her last, nor that her London appearance on a tennis court would also be her last.

For after withdrawing from the Masters, she missed the Australian Open and conceded her long-held No1 ranking. Finally, here in her homeland, she took centre stage one last time, to announce her retirement.

She read from a prepared speech—words from the biography she was launching—and she made it almost to the end before emotion got the better of her. It was not just Vergeer who had to fight back the tears.

The minutes she needed to compose herself were filled by tributes from an impressive clutch of sporting greats.

First Johan Cruyff, sitting in the front row: “For me, Esther is not only an ambassador of the sport, but also of life.”

Next, Roger Federer, who joined hands with her to open the 40th playing of the ABN AMRO tournament last night: “Esther is an amazing athlete, a great personality and she has done one of the most extraordinary things in our sport. I have a lot of admiration for what she has achieved.”

Last year, Novak Djokovic showed off a photo at the Laureus Sports Awards: “Me and one of the women in tennis I admire the most, Esther Vergeer.”

But it was at that same event 12 short months ago that I had asked what motivated her to keep competing as she approached her 31st birthday:
“I love this game more than anybody…it’s a lot of sacrifice, it’s a lot of effort, but I do enjoy that…Then there’s the motivation of the Olympics: You have to set certain goals, and this year for sure I’ve set my goal—my mind—on the Olympics.”

Clearly something changed after London 2012, and I asked if it had come as a relief to leave the pursuit for perfection behind.

“I made a list with all the pros and cons of being still a tennis player, or going for Rio, but at the end, the list of challenges on the tennis court was a lot shorter.

“And the streak and the medals and the titles, they put a lot of pressure of me… and I was just ready for another challenge in another way, and not having the pressure all the time of having to perform and having to win—so yes it is a relief.

“At the same time it’s kind of scary, because retiring from a world of sport that I’ve known for so long and that I’m so comfortable in is quite scary as well.”

Vergeer was only eight when an operation to repair a birth defect around her spinal cord left her paralysed.

She initially played wheelchair basketball as well as tennis and was a member of the Dutch team that won the European championship in 1997. But she eventually chose to concentrate on tennis and played her first international tournament in 1996. Two years later, at 17, she turned full-time and won her first big tournament, the Masters. The rest has become the stuff of history.

All along the way, though, Vergeer has been admired as much for her off-court demeanour and activities as for her sporting excellence.

She has long had her own foundation to spread the word of wheelchair tennis to children. She has been an ambassador for the Laureus Sport for Good Foundation, and during her break from tennis this winter, she took part in a Johann Cruyff Foundation trip to South Africa. The week-long trip marked the 10th anniversary of the Cruyff Foundation’s involvement in the Wheelchair Tennis Development Fund. Surely, I suggested, this is where much of her energy will now be focused.

“I’ve already started here in the Netherlands, helping kids with disabilities to grow and be involved with sports, which is helping me to find new goals, and share my knowledge and experience… helping me define the new reasons and new targets for my Foundation. Where are the big problems in disability sports? How do we get new kids involved, how do we get better marketing—I would like to explore that.

“For now, of course, being tournament director here is a big part of what I would like to do, and working for ABN AMRO as an ambassador and going into the business life.”

But Vergeer’s book has an interesting title: Strength and Vulnerability. Everyone recognises the strength but I wanted to know about the other side.

“I really liked to put that in because a lot of people know my strength—they think gold, never losing and having confidence that no one can beat me—but every single time I went out on court, there was an insecurity, my confidence wasn’t that high. I was worried about what people would think about my performance, my new chair…

“But there is also the vulnerability about my disability. I’m in a wheelchair, and there’s medical stuff on the horizon, like back problems, the nerves…so I wasn’t always the happy, secure Esther Vergeer who always wins.

“They are always a part of me, these insecurities, I would say. They gave me the power to believe in myself and to win, but that also gave me a lot of pressure, because nobody knew I was insecure—people thought I was invincible.”

Clearly London 2012 proved to be a fitting climax. She talked of the great strides that the Paralympics have taken since her first in 2000:

“It’s unbelievable, the growth disabled sports have gone through. I think the main change is the attitude of the players themselves. They’ve become more professional, they put in more hours, some of them can even make a living.

“And at London 2012, people were more informed than ever before…it was more focused on sports issues than medical issues. People didn’t feel pity for us any more. They just looked at the performance we did, and the sporting results and I think that was awesome.”

That seems the right word for Vergeer, too. She is a mix of strength and vulnerability, ambition and modesty, warmth and intelligence—and does not even mention the records:

“470 is amazing, but the first question I got when I told people I was retiring was ‘You’re not going to the 500?’ So there’s always a goal. I’m proud that in those 13 years I’ve been number one, I’ve been improving myself, so I was a step ahead of my competitors, and that’s what makes me even most proud than the number.”

Her book records her exceptional career almost to this moment, but not the latest turning of the page: “On January 11th, I was going to bed and I said ‘You know what, it can’t get any better, my career’s been perfect’—and that was good.”

One suspects that Chapter Two will be just the same.