F1 testing: Lewis Hamilton crashes his Mercedes on his first test run of the team's new Formula 1 car at Jerez on Wednesday 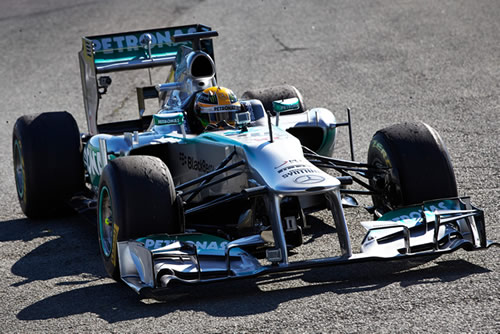 Lewis Hamilton in action before his crash at Jerez Photo: Mercedes AMG Petronas

Lewis Hamilton crashed his Mercedes on his first test run of the team’s new Formula 1 car at Jerez on Wednesday morning after suffering a breaking failure.

Hamilton, who moved to Mercedes from McLaren for the 2013 season, lost control of his car as he approached the hairpin at Turn 6 and ploughed through the gravel before hitting a tyre wall. He had completed 14 laps before the crash.

The 28-year-old appeared to escape unharmed but the team were unable to fix the car, with the Briton now forced to wait until Friday before taking part in another test run.

“Lewis suffered a loss of rear brake pressure, the front brakes enabled him to slow the car but he couldn’t avoid the barrier,” Mercedes said.

“We have traced the problem to the hydraulic brake line connecting to the right-rear calliper. The impact with the barrier also damaged the front left corner. There is no news yet as to when we will be back out on track.”

Hamilton’s new Mercedes team-mate Nico Rosberg will take to the wheel of the recently-unveiled F1 W04 again on Thursday.