F1 testing: Red Bull's Mark Webber says that the new RB9 inspires him with confidence for the 2013 season after Day Two in Jerez 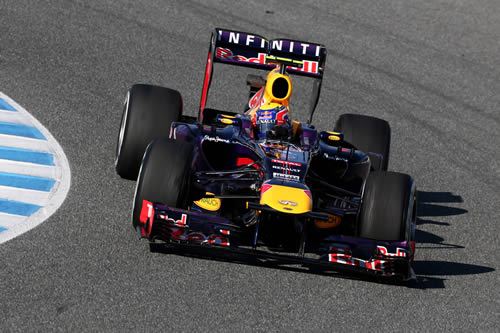 Mark Webber declared that Red Bull’s new RB9 fills him with confidence ahead of the new season, after the Australian posted the fourth-quickest time at testing in Jerez on Wednesday.

“I think in terms of consistency it’s great,” said Webber afterwards. “I’m very happy with the car and myself.

“I might have bombed a few laps here and there, but I’ve done 170 or more, which is a good total for the first two days with a new car.

“Overall, it’s been very good. The car gives me the confidence to push pretty hard and that’s always an indication that you have something you can build on.”

Webber, who finished sixth in the drivers’ standings last season and 102 points behind world champion Sebastian Vettel, believes the team are in a “better position” than this time last year.

“We’ve learned a lot more since yesterday and I’m sure that will continue tomorrow with Sebastian,” he added.

“I think we’ve put the car in a good position for him and hopefully he’ll be able to push on from there.

“If you ask me where I think we are compared to this time last year, I’d say we’re in a better position, but of course a lot of that is down to a lack of regulation changes.”