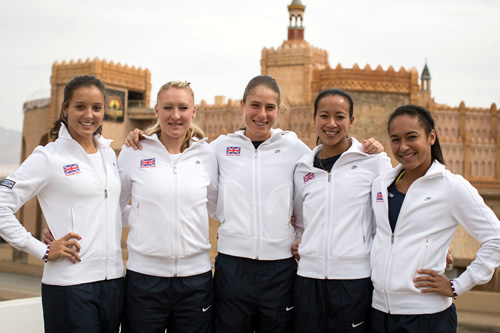 Hot on the heels of its male sibling, the Fed Cup is taking to courts all over the world this week.

The eight biggest guns—the World Group—fire up on Saturday on the hard courts of the Czech Republic, Russia and Serbia and the clay of Italy, while the eight in World Group II who aspire to join them will compete on the clay of Switzerland, Argentina, Spain and France for a chance to reach the World Group Play-offs.

But the elite represent just 16 of the 90 countries who compete annually for the premier team trophy in women’s tennis, and the next tier of nations plays to a different rhythm and a different schedule.

Already, the Zone Groups—those playing for the chance to join the knock-out format of the World Groups—have begun their campaigns in an arduous pool format: the best of three rubbers against three other teams. And poised in the top layer, Group I, is the young, ambitious squad from GB, one of 16 teams in the Europe/Africa Zone bidding for promotion.

They face tough competition, but that will not faze the fast-rising Heather Watson and Laura Robson. Both are riding personal ranking highs inside the top 50, both have broken new ground in Grand Slams in the last year, and both have reached WTA finals in the last six months—Watson winning a first title in Osaka at the end of 2012.

They are joined in the squad by another exciting talent who made her break-out to the Grand Slam main stage in 2012. Jo Konta, making her Fed Cup debut, reached the second round at the US Open in only her second appearance in a Major—and in her first at Wimbledon, she took the No28 seed Christine McHale to 10-8 in the final set: Not bad for a woman with fewer than half a dozen WTA matches under her belt.

This bright and enthusiastic trio is backed by the experience of Anne Keothavong who, just this month, was overtaken by Konta in the rankings. Keothavong, more than a decade older than the youngest of her three team-mates, first played for GB in 2001—at 17, the youngest Briton ever to play in the tournament—and has since played 43 Fed Cup matches.

Team stalwart Elena Baltacha, who is currently recovering from injury, will also be travelling to Eilat in Israel, and the team will be led by Judy Murray, who was appointed GB Fed Cup captain just over a year ago.

As for this nation’s history in Fed Cup, it is long and, despite never winning the trophy, very successful. GB is one of only four countries to have competed in every Fed Cup competition since it began in 1963, and reached the final on four occasions: 1967, 1971, 1972 and 1981.

That first final featured Ann Jones and Virginia Wade, the latter playing her first ever Fed Cup tie. She would play in all the other finals, too—partnered in the last by another Grand Slam champion, Sue Barker. And Wade has still played more Fed Cup ties, 57, over more years, 17, than any other Briton.

It’s too early to say whether the latest batch will endure so long, but they are certainly starting young, and they have hopes of matching, if not exceeding, their predecessors’ achievements.

The seeds were sown last year, when they won all four of their Zone matches to advance to the World Group II Play-offs, only to miss out to Sweden at the final hurdle.

They have a decent draw in the early stages this year, being the highest ranked team, at 18, in Pool B with Portugal, Hungary and Bosnia/Herzegovina. If they top their pool, the GB team will face the winners of Pool D—Slovenia, the Netherlands, Bulgaria or Luxembourg. Watson and Robson are both ranked higher than any other woman in either of these Pools.

So they will be optimistic about again reaching the play-off stages for World Group II in April. There, the most likely opponents will be either the Group’s top seed Belarus—though currently weakened by the absence of world No1 Victoria Azarenka—or Romania or, most dangerous of all, Poland, which boasts world No4 Agnieszka Radwanska.

Murray was certainly up-beat about the GB’s team’s chances: “We’ll go over [to Eilat] very much aiming to get out of that Zone again and into another World Group Play-off.”

The squad’s first scheduled session in the Red Sea resort was washed out by rain-storms, so their opening tie—two singles and a doubles match—against Bosnia/Herzegovina is postponed until Thursday morning (7.30am GMT).

Not until Sunday, therefore, will Great Britain know whether they are, once again, one of the two surviving teams from Europe/Africa—but the signs are very good.

See the ITF’s Fed Cup website for details of the complexities of the Zone Groups and the competition’s structure.