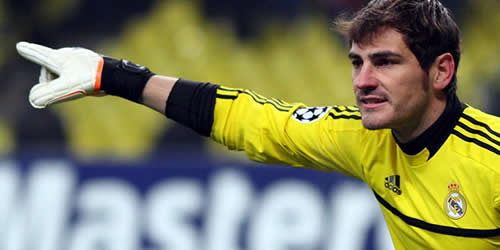 Iker Casillas is out injured after an operation on his left hand Photo: Soccer.ru, via Wikimedia

Jose Mourinho’s side reached the Copa del Rey final with a 3-1 win at Barcelona to seal a 4-2 aggregate success, with Madrid set to face their bitter rivals again in La Liga at the Bernabeu on Saturday.

With the nine-time European champions a mammoth 16 points behind Barça in the league title race, Casillas is already turning his thoughts to the club’s trip to Old Trafford, with the tie finely poised at 1-1 from the first leg.

He said: “We have to transfer this to the match against Manchester United. It is also 1-1 and we have to score and keep a clean sheet. That’s the aim that we’re going with.

“Manchester United know how to play football, it is a difficult place to go to and we have to take what we have done [against Barça] to Old Trafford.”

Casillas, who is still out injured with a fractured bone in his left hand, is adamant Madrid will not give up their league title defence, although the goalkeeper admits that winning the Champions League is a more realistic possibility.

“Hopefully this is a turning point to have won this tie and to make it better it was against Barcelona,” said Casillas.

“We played a very good tie all round and this will motivate us to make a good showing of ourselves in other matches. Winning the Champions League is a better possibility than the league, but Real Madrid will fight to the end.”