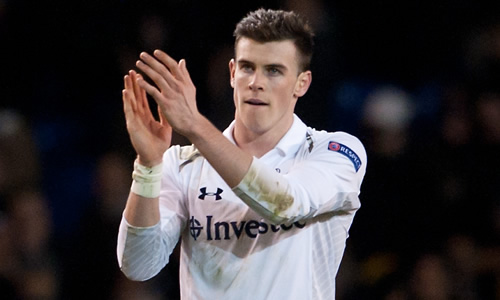 Gareth Bale has scored 17 goals so far this season Photo: Back Page Images

Jan Vertonghen is hoping that Gareth Bale will ignore the advances of Real Madrid and stay at Tottenham Hotspur beyond this season.

The 23-year-old winger continued his sublime form on Thursday by netting both of Spurs’ goals in a 2-1 Europa League victory over Lyon at White Hart Lane.

Bale, who has now scored all of Tottenham’s last six goals, has been heavily linked with a move away from White Hart Lane in recent weeks, with Real Madrid said to be planning a big-money swoop for the Wales international in the summer.

But Vertonghen has urged his team-mate to commit his future to the north Londoners.

“I’m glad he’s a part of our team,” Vertonghen was quoted as saying by talkSPORT. “I’m pleased I don’t have to play against him, except when I represent Belgium!

“He’s an amazing player, everybody can see that. I hope he stays next season as well.”

Meanwhile, Bale – who has now scored 17 goals this season – believes he is in the form of his life – but insisted that there is a lot of room for improvement.

“I would probably say it is the best I have been playing in my career,” Bale told Sky Sports. “As I said I am enjoying my football and the team is playing well which makes things easier for me.

“I just have to keep my head down and keep working hard and keep my form.

“I still have a lot of improvement, I know what I have to do but season on season I am improving but I will just keep working hard and hopefully get better.”