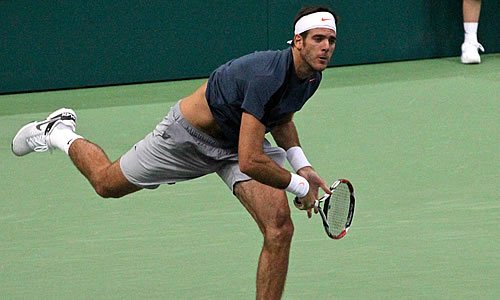 With the ABN AMRO championships in Rotterdam reaching the half-way stage and the second round nearing completion, the quarter-final line-up was almost set.

Thus far, there was just one seed through, Gilles Simon, and that left just the top two seeds, Roger Federer and Juan Martin del Potro, able to add their bold names to the last-eight line up.

Del Potro was the first to step up and it proved to be far from plain sailing in the first set. He was up against the hugely talented but notoriously under-achieving No132 from Latvia, Ernests Gulbis, a man del Potro knew from junior days. As he said afterwards:

“I know him since juniors and he has everything to be higher. He’s beaten many good players in the past, we know he is very dangerous.”

The 24-year-old Gulbis has been as high as 21 in the world but ended last year qualifying for Challenger events. Rotterdam was his first main tour event of the season, and his first time at the Ahoy arena, but he clearly found it to his liking.

First he took out two seeds in qualifying, barely breaking a sweat against Sergiy Stakhovsky and Tobias Kamke, then he took out Robin Haase in the first round for the loss of just three games.

In the first set against del Potro, he continued to find the kind of form that last year took him past Tomas Berdych in the first round of Wimbledon in three tie-breaks. Del Potro has a big game, but so does Gulbis, and both hit more than 220 km/hr on serve during the course of the match.

With just one break point chance in the set—Gulbis saved it—and five aces from Gulbis, they headed to a tie-break where the Latvian also took an early lead. But del Potro is not just strong in body but also in mind, and he never wavered from his shots. There were some dramatic baseline exchanges, plus a couple of volleys and an inch-perfect lob from Gulbis, but del Potro forced the error on the last point to take the set, 7-5.

Still Gulbis played aggressive and attractive tennis, out-acing his opponent seven to three and with a higher first serve rate. In the end, it was the strong mind of del Potro that prevailed: He saved a break point in the seventh game, despite receiving a time warning after a long, battling exchange. He held and Gulbis hit a couple of long forehands to give del Potro the opening for the one break. He served it out, 6-3.

With typical modesty, he gave credit to his opponent: “Basically, the first set I got lucky in the last point on the tie-break to take the first one, then in the second I improved my game, and in the end I was more aggressive.”

Just as against Monfils, this was a strong, focused performance that will ring alarm bells further up the draw. He said of the “big four”:

“Well they are playing much better than me, that is the reason I’m working so hard, working on my serve and trying to come to the net more than I did before. I think it is a very long road to be the top four or five, but I’m trying to get closer, and I’m improving.”

He is, too. For a big man used to winning heavy points from the back of the court, his improvement in his forward movement and net game is impressive. He also beat Federer in their last two meeting, indoors in the Basel final and at the World Tour Finals, so Federer needed also to hit his stride.

He took on Dutch wild card Thiemo de Bakker, a man he met for only the first time in Davis Cup last year. That was on clay and Federer won in straight sets. De Bakker spent the rest of 2012 playing Challengers in South America, then failed to qualify for either the Australian Open or Brisbane, losing to players ranked lower than his own No123 position.

In truth, this looked a David and Goliath contest—though the Dutchman was substantially the bigger of the two. But despite a love hold by Federer in the opening game, the match started very patchily. De Bakker pushed the Swiss to deuce in the third but then went 0-40 down in the fourth. He was broken at the second attempt, yet Federer did not press home what looked like a decisive lead when he failed to convert three more break chances in the sixth.

The tennis was erratic, lacking rhythm—though there was a smattering of gasp-inducing shots here and there. Federer double faulted at the start of the seventh, challenging both balls. He smiled at the second, doing it almost for the fun, it seemed.

He did hold, but de Bakker, serving the better throughout the set, fired off a couple of aces to hold more easily. In contrast, Federer serving for the set made two more double faults to face deuce, but eventually took the set, 6-3, in 33 minutes.

This would be the time, as a rule, when Federer loosened the reins and rushed to the finish line—and he did break in the opening game when de Bakker’s attempts to take control at the net ended in errors. But in the fourth game, Federer faced a break point after a shanked backhand—shaking his head in disgust as the errors piled up. And de Bakker, to his credit, went on the offensive, threw in drops and wrong-footed Federer with some speeding forehands.

And so it progressed. Uneven, short rallies with little flow until Federer came to serve for the match after around an hour. He finished it with a love game, 6-4, but one must think he will have to up his game against his next opponent, Julien Benneteau. For he will no doubt remember how nearly he lost their match at Wimbledon last year. As he said aftewards: “I’m aware he plays me tough and plays me well. Things went well for me at the Olympics, but I know I’m in for a tough match. He’s also won his matches here convincingly, that obviously makes it more difficult.”