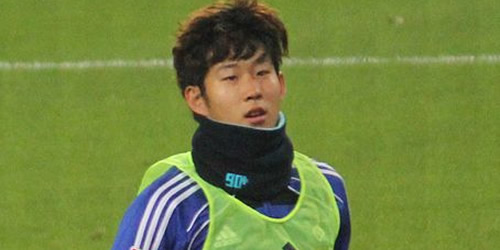 Heung-Min Son has been linked with United and Chelsea Photo: Crofab/Wikimedia

Chelsea and Manchester United have made offers for Hamburg youngster Heung-Min Son, according to the striker’s agent.

The 20-year-old has been one of Hamburg’s standout performers this season, with the South Korea international scoring nine goals in 21 Bundesliga appearances.

Son, who joined the Hamburg youth academy aged 16, has been linked with a number of top European clubs of late.

And his agent Thies Bliemeister, who says Inter Milan have been tracking his client in recent months, also claims that Premier League duo Chelsea and United have submitted bids for the forward.

“Inter Milan’s emissaries saw a couple of his matches, but so far I have not had any contact with the Italian club’s officials,” Bliemeister told Interlive.

“A transfer in the next summer? He has signed a new contract with Hamburg SV extending it for one year, but there have been many offers for him as from Manchester United and Chelsea.”

Son turned down the opportunity to represent South Korea at the London 2012 Olympics, where his country were bronze medallists, preferring to focus on his club football.

He has scored 17 goals in 65 appearances for Hamburg after breaking into the first-team in 2010.

We’re all behind him! Arsenal’s Vermaelen issues backing for Wenger